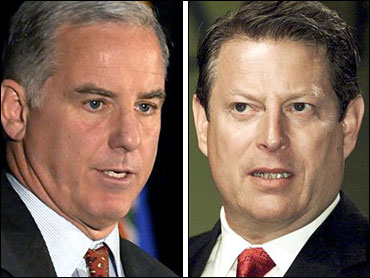 Dean told a crowd of several hundred supporters gathered Monday night at New York's Roseland Ballroom that he could "neither confirm nor deny" reports of Gore's endorsement.

Gore, who won the popular vote but lost the electoral vote in the disputed 2000 election, has agreed to appear with Dean Tuesday in Harlem, N.Y., and then travel with the former Vermont governor to Iowa for a formal endorsement. That's according to several Democratic sources, including one close to Gore.

Dean will then have to jet to New Hampshire, where the last Democratic presidential candidate debate is being held Tuesday night.

As word of Gore's decision spread through political circles, sources close to the campaign told CBS News the former Vice President believes Democrats have fought themselves for too long, that he is "unhappy" with the tone of the campaign - and believes his best move is to endorse Howard Dean and do it now.

Sources also say Gore has become more and more angry about President Bush's handling of the war in Iraq. That attitude was reflected in his Nov. 9th speech to MoveOn.org, which was filled with stinging criticism of the war as well as Attorney General John Ashcroft and the Patriot Act - opposed by civil libertarians and defended by the White House as part of the war on terror.

The coveted endorsement by Gore is a breathtaking victory for a candidate whose anti-war, anti-establishment candidacy has given pause to party leaders and key constituencies, several Democratic strategists said.

"What this says is that all these Washington insiders who have been gnashing their teeth, wringing their hands and clinging to their cocktail cups can relax now. Dean's been knighted by the ultimate insider," said Democratic consultant Dean Strother of Washington. "It's game, set and match. It's over."

The endorsement will reverberate with the voters Dean now needs the most: centrist and southern Democrats, reports CBS News Correspondent Wyatt Andrews.

Other Democrats offered more cautious appraisals, but the overwhelming consensus was that Dean's coup makes him the overwhelming favorite to claim the nomination. Even advisers to Dean's rivals conceded they were stunned and disheartened by the news.

Gore won the popular vote by half a million votes in 2000 but conceded to Republican George W. Bush after a tumultuous 36-day recount in Florida and a 5-4 Supreme Court vote against him. Gore's concession came Dec. 13, 2000.

The former vice president is widely popular among key primary voters due in part to the widespread belief among Democratic activists that the election was taken from him. In several surveys of Democratic voters, Gore and New York Sen. Hillary Rodham Clinton, who repeatedly say they won't seek the nomination next year, have fared better than the announced presidential candidates.

The Gore endorsement comes just weeks after two key unions — the Service Employees International Union and the American Federation of State, County and Municipal Employees — backed Dean's candidacy. The approval of Bill Clinton's No. 2 bolsters Dean's case that he can carry the party's mantle next November and represents more than an Internet-driven outsider relying on the support of largely white, upscale voters.

It also helps Dean, who leads in state polls in New Hampshire and Iowa as well as in the fund-raising battle, as he tries to persuade Democrats worried about his lack of foreign policy experience and campaign missteps that his nomination is all but certain.

In New Hampshire, according to a poll released Monday by Franklin Pierce College, Dean is way out in front among likely voters in the primary, just seven weeks away. Dean has 39 percent, followed by 14 percent for John Kerry, 5 percent each for Wesley Clark and Sen. John Edwards, 4 percent for Sen. Joe Lieberman, 3 percent for Rep. Dick Gephardt, and 1 percent each for Rep. Dennis Kucinich, Carol Moseley Braun and the Rev. Al Sharpton.

"It goes so far in dispelling this idea that swirls around that Dean would not be a good candidate in the general (election), that Dean in some way would be damaging to the Democratic Party," McEntee said.

In choosing Dean, Gore bypassed his own vice presidential pick in 2000, Sen. Joe Lieberman of Connecticut, who is struggling in his bid to capture the nomination. Lieberman even waited until after Gore made his decision last December not to run before embarking on his candidacy.

The Lieberman campaign issued a terse statement Monday, saying, "I was proud to have been chosen by Al Gore in 2000 to be a heartbeat away from the presidency," and added, "Ultimately, the voters will make the determination and I will continue to make my case about taking our party and nation forward."

Lieberman spokesman Jano Cabrera said Gore did not tell the Connecticut senator about the endorsement, which Lieberman had sought.

Just three years ago, Dean considered challenging Gore for the Democratic nomination then signaled that he would like to be mentioned as a vice presidential candidate. He did not make Gore's short list.

A spokesman for Rep. Dick Gephardt of Missouri, another Dean rival, issued a statement citing the congressman's work with Gore to "pass the Clinton economic plan, pass the assault weapons ban and defend against Republican attacks on Medicare and affirmative action. On each of these issues, Howard Dean was on the wrong side."

In an unusual response, Democratic candidate Wesley Clark issued a statement touting the number of former Gore staffers working on his campaign.

Gore is pre-eminent among the party's establishment, second only to the Clintons, and his backing is prized among the candidates looking for an edge in the primary fight. Sources close to both Clintons said Monday that they would not endorse in the primary race.

Democratic strategist Steve Jarding of Virginia said the endorsement might force other candidates to drop from the race.

"This sends a clear signal that Dean is bringing together two major forces — Democratic insiders and outsiders. Gore is the ultimate insider," Jarding said, adding that Dean can still be beaten "but it just got a ton harder."

Jenny Backus, a Democratic strategist from Washington, said Gore will help Dean gain access to "some key constituencies, African-Americans and women and organized labor, and in Iowa."

Besides his 2000 bid, Gore ran for president unsuccessfully in 1988 and then, while a Tennessee senator, was surprised to be picked as Bill Clinton's running mate in 1992. Though Gore often was criticized as overly controlled and cautious, he was praised for the work he did as an influential vice president.

He used his expertise in science and technology to be the White House point man on telecommunications reform and the information superhighway.

After losing in 2000, Gore accepted the job of vice chairman of Metropolitan West Financial, a Los Angeles-based financial services holding company. He juggled that job with his duties as college professor, guest speaker and author.

Gore announced Dec. 15, 2002 that he would not make another run for the White House, saying a rematch against President Bush would force him to revisit the recount ordeal of 2000.