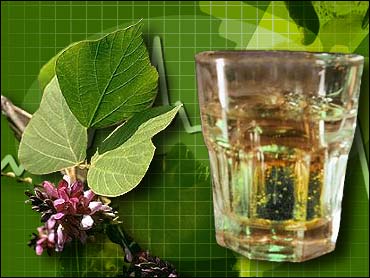 A hearty, invasive plant introduced to this country decades ago to control soil erosion could have what it takes to curb binge drinking, new research suggests.

Kudzu, an ever-expanding vine considered a pest in much of the South, appears to contain a compound that can be effective in reducing alcohol intake among humans.

Researcher Scott Lukas did not have any trouble rounding up volunteers for his study, published in this month's issue of Alcoholism: Clinical and Experimental Research.

Lukas' team at Harvard-affiliated McLean Hospital set up a makeshift "apartment" in a laboratory, complete with a television, reclining chair and a refrigerator stocked with beer.

Findings show that subjects who took kudzu drank an average of 1.8 beers per session, compared with the 3.5 beers consumed by those who took a placebo.

Lukas was not certain why but speculated that kudzu increases blood alcohol levels and speeds up its effects. More simply put, the subjects needed fewer beers to feel drunk.

"That rapid infusion of alcohol is satisfying them and taking away their desire for more drinks," Lukas said. "That's only a theory. It's the best we've got so far."

In 2003, David Overstreet and other scientists found the herb to be effective in reducing alcohol intake on rats.

"There's a lot of anecdotal evidence from China that kudzu could be useful, but this is the first documented evidence that it could reduce drinking in humans," said Overstreet, who described Lukas' work "groundbreaking."

After the first session, some subjects received capsules of kudzu, others a placebo.

"Unbeknownst to them, I was weighing that mug of beer every time they took a sip," Lukas said. "We actually got a sip-by-sip analysis of their drinking behavior."

None of the subjects had any side effects from mixing kudzu with beer.

"It's perfectly safe, from what we can tell," Lukas said. "Individuals reported feeling a little more tipsy or lightheaded, but not enough to make them walk into walls or stumble and fall."

Though kudzu won't turn drinkers into teetotalers, Lukas said, he hopes it can help heavy drinkers to cut back.

"That way, they're a lot closer to being able to cut down completely," he said.

Keung, not directly involved in Lukas' study, said he has extracted a compound from kudzu root that he hopes to turn into a drug for reducing alcoholics' cravings.

"The most urgent need is helping people who cannot help themselves, who need a drug to help them stop drinking," Keung said.