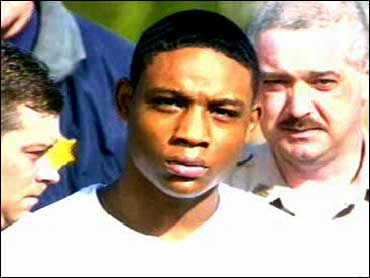 Imagine if the entertainment industry created a video game in which you could decapitate police officers, kill them with a sniper rifle, massacre them with a chainsaw, and set them on fire.

Think anyone would buy such a violent game?

They would, and they have. The game Grand Theft Auto has sold more than 35 million copies, with worldwide sales approaching $2 billion.

Two weeks ago, a multi-million dollar lawsuit was filed in Alabama against the makers and marketers of Grand Theft Auto, claiming that months of playing the game led a teenager to go on a rampage and kill three men, two of them police officers.

Can a video game train someone to kill? Correspondent Ed Bradley reports.

Grand Theft Auto is a world governed by the laws of depravity. See a car you like? Steal it. Someone you don't like? Stomp her. A cop in your way? Blow him away.

There are police at every turn, and endless opportunities to take them down. It is 360 degrees of murder and mayhem: slickly produced, technologically brilliant, and exceedingly violent.

And now, the game is at the center of a civil lawsuit involving the murders of three men in the small town of Fayette, Ala. They were gunned down by 18-year-old Devin Moore, who had played Grand Theft Auto day and night for months.

Attorney Jack Thompson, a long-time crusader against video-game violence, is bringing the suit. "What we're saying is that Devin Moore was, in effect, trained to do what he did. He was given a murder simulator," says Thompson.

"He bought it as a minor. He played it hundreds of hours, which is primarily a cop-killing game. It's our theory, which we think we can prove to a jury in Alabama, that, but for the video-game training, he would not have done what he did."

Moore's victims were Ace Mealer, a 911 dispatcher; James Crump, a police officer; and Arnold Strickland, another officer who was on patrol in the early morning hours of June 7, 2003, when he brought in Moore on suspicion of stealing a car.

Moore had no criminal history, and was cooperative as Strickland booked him inside the Fayette police station. Then suddenly, inexplicably, Moore snapped.

According to Moore's own statement, he lunged at Officer Arnold Strickland, grabbing his .40-caliber Glock automatic and shot Strickland twice, once in the head. Officer James Crump heard the shots and came running. Moore met him in the hallway, and fired three shots into Crump, one of them in the head.

Moore kept walking down the hallway towards the door of the emergency dispatcher. There, he turned and fired five shots into Ace Mealer. Again, one of those shots was in the head. Along the way, Moore had grabbed a set of car keys. He went out the door to the parking lot, jumped into a police cruiser, and took off. It all took less than a minute, and three men were dead.

"The video game industry gave him a cranial menu that popped up in the blink of an eye, in that police station," says Thompson. "And that menu offered him the split-second decision to kill the officers, shoot them in the head, flee in a police car, just as the game itself trained them to do."

After his capture, Moore is reported to have told police, "Life is like a video game. Everybody's got to die sometime." Moore is awaiting trial in criminal court. A suit filed by the families of two of his victims claims that Moore acted out a scenario found in Grand Theft Auto: The player is a street thug trying to take over the city. In one scenario, the player can enter a police precinct, steal a uniform, free a convict from jail, escape by shooting police, and flee in a squad car.

"I've now got the entire police force after me. So you have to eliminate all resistance," says Nicholas Hamner, a law student at the University of Alabama, who demonstrated Grand Theft Auto for 60 Minutes. Like millions of gamers, the overwhelming majority, he says he plays it simply for fun.

David Walsh, a child psychologist who's co-authored a study connecting violent video games to physical aggression, says the link can be explained in part by pioneering brain research recently done at the National Institutes of Health -- which shows that the teenage brain is not fully developed.

Does repeated exposure to violent video games have more of an impact on a teenager than it does on an adult?

"It does. And that's largely because the teenage brain is different from the adult brain. The impulse control center of the brain, the part of the brain that enables us to think ahead, consider consequences, manage urges -- that's the part of the brain right behind our forehead called the prefrontal cortex," says Walsh. "That's under construction during the teenage years. In fact, the wiring of that is not completed until the early 20s."

Walsh says this diminished impulse control becomes heightened in a person who has additional risk factors for criminal behavior. Moore had a profoundly troubled upbringing, bouncing back and forth between a broken home and a handful of foster families.

"And so when a young man with a developing brain, already angry, spends hours and hours and hours rehearsing violent acts, and then, and he's put in this situation of emotional stress, there's a likelihood that he will literally go to that familiar pattern that's been wired repeatedly, perhaps thousands and thousands of times," says Walsh.

"You've got probably millions of kids out there playing violent games like Grand Theft Auto and other violent games, who never hurt a fly," says Bradley. "So what does that do to your theory?"

"You know, not every kid that plays a violent video game is gonna turn to violence. And that's because they don't have all of those other risk factors going on," says Walsh. "It's a combination of risk factors, which come together in a tragic outcome."

Arnold Strickland had been a police officer for 25 years when he was murdered. His brother Steve, a Methodist minister, wants the video game industry to pay.

"Why does it have to come to a point to where somebody's life has to be taken before they realize that these games have repercussions to them? Why does it have to be to where my brother's not here anymore," says Steve Strickland. "There's not a day that goes by that I don't think about him."

Strickland, along with Mealer's parents, are suing Moore, as well as Wal-Mart and GameStop, which sold Moore two versions of Grand Theft Auto. Both companies sent us letters insisting they bear no responsibility for Moore's actions, and that the game is played by millions of law-abiding citizens.

Take-Two Interactive, the creator of Grand Theft Auto, and Sony, which makes the device that runs the game, are also being sued. Both declined to talk to 60 Minutes on camera. Instead, they referred it to Doug Lowenstein, who represents the video game industry.

Lowenstein is not named in the lawsuit, and says he can't comment on it directly. "It's not my job to defend individual titles," says Lowenstein. "My job is to defend the right of people in this industry to create the products that they want to create. That's free expression."

"A police officer we spoke to said, 'Our job is dangerous enough as it is without having our kids growing up playing those games and having the preconceived notions of "let's kill an officer." It's almost like putting a target on us.' Can you see his point?" asks Bradley.

"Look, I have great respect for the law enforcement officers of this country.... I don't think video games inspire people to commit crimes," says Lowenstein. "If people have a criminal mind, it's not because they're getting their ideas from the video games. There's something much more deeply wrong with the individual. And it's not the game that's the problem."

But shouldn't Moore, alone, face the consequences of his decision to kill three men?

"There's plenty of blame to go around. The fact is we think Devin Moore is responsible for what he did," says Thompson. "But we think that the adults who created these games and in effect programmed Devon Moore and assisted him to kill are responsible at least civilly.

Thompson says video game companies had reason to foresee that some of their products would trigger violence, and bolsters his case with claims that the murders in Fayette were not the first thought to be inspired by Grand Theft Auto.

In Oakland, Calif., detectives said the game provoked a street gang accused of robbing and killing six people. In Newport, Tenn., two teenagers told police the game was an influence when they shot at passing cars with a .22 caliber rifle, killing one person. But to date, not a single court case has acknowledged a link between virtual violence and the real thing.

Paul Smith is a First Amendment lawyer who has represented video game companies. "What you have in almost every generation is the new medium that comes along. And it's subject of almost a hysterical attack," says Smith. "If you went back to the 1950s, it's hard to believe now, but comic books were blamed for juvenile delinquency. And I think what you really have here is very much the same phenomenon playing itself out again with a new medium."

Why does he think the courts have ruled against these kinds of lawsuits?

"If you start saying that we're going to sue people because one individual out there read their book or played their game and decided to become a criminal, there is no stopping point," says Smith. "It's a huge new swath of censorship that will be imposed on the media."

Despite its violence, or because of it, the fact is that millions of people like playing Grand Theft Auto. Steve Strickland can't understand why.

"The question I have to ask the manufacturers of them is, 'Why do you make games that target people that are to protect us, police officers, people that we look up to -- people that I respect -- with high admiration,'" says Strickland.

Both Wal-Mart and GameStop, where Moore purchased Grand Theft Auto, say they voluntarily card teenagers in an effort to keep violent games from underage kids. But several states are considering laws that would ban the sale of violent games to those under 17.

Why are so many drugs in short supply?