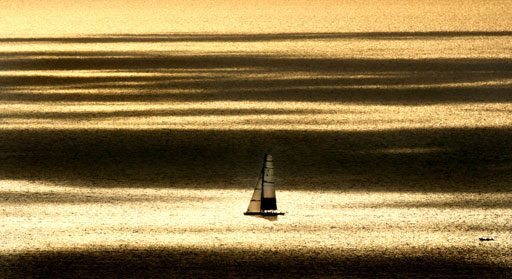 Surely, then, they can't do it in commercials that last only 30 seconds, or, for that matter, in newspaper ads or television interviews edited to sound bites.

To compensate, some of the candidates are buying half-hour blocks of airtime in early primary and caucus states to broadcast programs that allow them to speak at length about whatever they choose. Whether voters are tuning in, however, is debatable.

"The conventional wisdom is that nobody will sit for 30 minutes to listen to a political message," said Darrell West, a political science professor at Brown University. "This year is different because the country is polarized. There's also a market for longer presentations at a time when so many substantive issues are on the agenda."

Howard Dean has run half-hour programs in Wisconsin, New Mexico and Iowa that profiled his family, featured supporters and sought donations. In New Hampshire, Joe Lieberman has aired footage from a town-hall meeting where he talked about issues including prescription drugs and the environment. John Kerry held a similar forum that was broadcast live across Iowa, and he plans another live forum for early January in New Hampshire.

The concept isn't new. Ross Perot spent millions filling the TV airwaves with half-hour ads with quirky titles like "Deep Voodoo, Chicken Feathers and The American Dream" during his presidential runs in 1992 and 1996. George W. Bush, Al Gore and Bill Bradley each ran at least one long-format program in the 2000 primaries.

It's unclear how effective such programs are because the media markets where they have aired until now are so small that viewership isn't measured frequently. As a result, campaigns use other measures to determine how many people are watching, such as the numbers of phone calls or amounts of donations they receive on the days such programs run.

The 2004 candidates are running their extended spots mainly on Saturday evenings or on Sundays, when stations have longer and cheaper time slots available. To ensure viewers, the campaigns have held "watch parties" for supporters and undecided voters.

Dean ran a half-hour program once early this month as a test in a relatively cheap media market, Madison, Wis., to determine its effectiveness. The spot, which included Dean's experiences as a doctor and Vermont governor, cost $2,100. The campaign collected more than that in donations on the day it ran, and it decided to run the program again in that media market as well as in Albuquerque, N.M., and Des Moines and Cedar Rapids, Iowa.

Lieberman, a Connecticut senator and the 2000 Democratic vice presidential candidate, spent $15,000 to air a taped town hall meeting once on one New Hampshire station. The campaign also ran 30-second promotional ads leading up to the program, urging people to watch. The result, the campaign says, was a flood of phone calls into his New Hampshire headquarters from supporters asking how they could help.

Kerry, a Massachusetts senator, paid $28,000 to broadcast a live town hall meeting with 50 undecided voters on several Iowa stations on Dec. 14. But the program was delayed for a half-hour - and perhaps was overshadowed - by Saddam Hussein's capture that day.
Still, Kerry used the time to explain his views on issues ranging from the economy to abortion to health care.

Stephanie Cutter, a Kerry spokeswoman, said advisers decided that a live-town hall meeting would be the perfect medium for Kerry to be himself and talk in-depth about why he should be elected.

"It worked so well, we're doing it again," she said.

Scott Reed, a Republican consultant who was the manager of Bob Dole's 1996 presidential campaign, said Dole never ran half-hour spots because he wasn't in a crowded field like the 2004 Democrats who are using the long-format programs to distinguish themselves from one another.

Besides, Reed said, such lengthy spots are "a total waste of money."

Brown University's West disagreed, saying the ads are effective even if only a few people tune in because of the news coverage they receive.

"In '92, a lot of people saw Perot's infomercials, but many more read about them," he said.