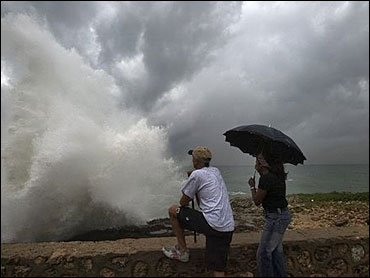 This year's debate over campaign finance reform is boiling down to predictable partisan jabs with no changes in the status quo.

Vice President Al Gore is under fire for Democratic National Commitee (DNC) campaign ads funded by so-called "soft money." Only months ago, Gore had vowed, "I will take the first step by requesting the Democratic National Committee not to run any issue ads paid for by soft money unless and until the Republican Party uses such money for advertising." Republicans now charge the vice president has broken that promise.

"The vice president said until the RNC (Republican National Committee) responded themselves or started using loopholes like 527," the tax code rule which allows independent nonprofit groups to fund their own campaign-style ads, as long as they don't directly advocate the election or defeat of any candidates. 527 groups operate outside of federal election laws that mandate disclosure of donors and expenditures.

Also on Face The Nation, Rep. Lindsey Graham (R-S.C.) said of Gore and his promise: "This manipulation has continued for seven and a half years. This is about honesty and trust. I can vote for somebody I disagree with politically. I can't vote for somebody I don't trust to tell me the truth."

The 216-202 House vote came after the Republican leadership, under pressure from moderates within its ranks, agreed to allow a vote on the legislation. GOP House leaders have agreed to bring a Republican version of the measure to the floor later this month.

"I believe that the leadership has come to the realization that this is a growing problem," Rep. Mike Castle, R-Del., said after attending a meeting with Speaker Dennis Hastert and other top GOP leaders.

The debate over disclosure is all that remains in the current Congress of the drive to enact fundamental changes in the nation's campaign system. Legislation to curb the influence of money cleared in the House despite opposition from the GOP leadership but has been bottled up in the Senate by a filibuster backed by senior Republicans.

Ads by 527 groups have gained increasing prominence in recent months. One group aided Texas Gov. George W. Bush in his battle for the Republican presidential nomination, for example. And Democrats have filed suit against the House Republican Whip, Rep. Tom DeLay of Texas, alleging he illegally oversees a network of 527s.

"This is a moment in which Democrats and Republicans can come together to pasan end to the secret organizations with undisclosed money," said House Democratic leader Dick Gephardt of Missouri.

Some Republicans sided with Democrats. "A 'no' vote is going to be mighty hard to explain in November," said Rep. Greg Ganske, R-Iowa.

But Rep. Amo Houghton, a New York Republican whom the leadership chose to draft legislation, cautioned against hasty action. "In a political year, there are all sorts of pressures. I am a very strong advocate of campaign finance reform," he said. "I do think there's another way of doing this and doing it right."

Castle told reporters at a news conference that Hastert, Majority Leader Dick Armey and DeLay had agreed to bring the issue to the floor before Congress adjourns at the end of the month for a July 4 break.

In his comments to reporters, DeLay denied that an agreement was made to allow a vote on legislation by Castle but said the leaders will allow a vote on the measure that Houghton produces. DeLay also made clear he personally opposes legislation to compel groups to disclose their donors.

Houghton told reporters he expects to draft legislation that will apply to a larger class of organizations than those covered by the Democratic measure.

The vote on the House floor marked the second time in less than a month that Democrats have attempted to attach their proposal to Republican tax cut measures.

Voting in support were 195 Democrats, six Republicans and one independent. Opposed were 210 Republicans, five Democrats and one Republican.