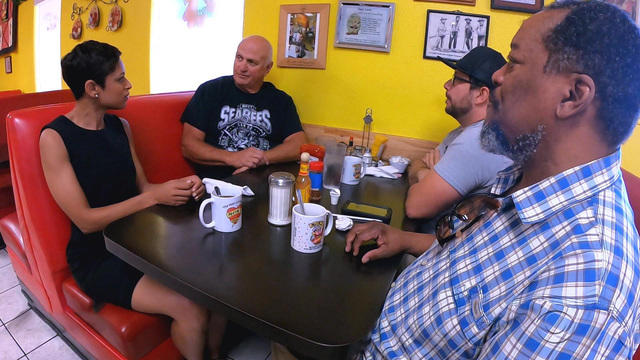 After the Democratic presidential candidates held their second round of debates in Detroit, most headed to Nevada for a series of campaign events. Nevada, which went for Hillary Clinton by a slim margin in 2016, is the third state to hold a primary or caucus and represents a diverse electorate. In a "CBS This Morning" original series, "Three Meals," CBS News national correspondent Jericka Duncan visited three Nevada cities to talk with voters over breakfast, lunch and dinner.

The community of Pahrump, Nevada, located about an hour west of Las Vegas, was left with acres of empty lots after the housing crisis a decade ago -- but now, builders and home buyers are back.

Most of the customers at Pahrump's Mom's Diner leaned conservative, and were happy to tout an improved economy. "There's more people working in America right now than there's ever been," said Bob Morris.

Immigration was another issue that mattered, regardless of party.  One patron said that "I don't go for an open border system at all."

One group of church friends included an independent, a Republican and a Democrat, who were learning about each other's political views for the first time.

Duncan asked one member, Tim Pereira, if there were any Democrats that could convince him to vote blue in the 2020 election. "I usually vote Republican just because I'm a Christian," he replied. "And there's some policies as far as abortion and things, I just, I will never vote for somebody who is 'pro' those things."

But another member of the group that he backed Biden. "Biden to me is a straight shooter," he said.

Between communities in Nevada are vast stretches of open land, about 85% of which is owned by the federal government. That was a problem for retirees at the Muddy River Bar and Grill in rural Moapa.

"The government controls too much of the land in Nevada, way too much," said Peggy Reynolds. That argument enjoyed bipartisan support with a group of retirees Duncan met there during lunch.

"Well, being retired, I'm concerned about the prices going up and our retirement staying low, social security-wise," said Stephen James.

"Prescription prices are so high. And so I think that's a concern for all seniors," said Dorothy Brisbee.

When asked about their thoughts on immigration, James said that "The biggest problem we have, as far as that is concerned, we're not making it so people can come in legally. I mean, the paperwork is humongous."

"The one thing that still bothers me is that people still refer to me as a Mexican," Brisbee added. "I'm an American. A kid comes from Germany, learns English, nobody asks, 'Where are you from?' Because there's a stereotype of what an American looks like."

The coal plant that once operated in Moapa was imploded earlier this month. When asked if she was glad the coal plant is gone, Vickie Simmons, chairman of the Moapa Band of Paiutes, replied, "Yes, yes, I'm glad. We're on our way to a new economy. People have to give up on this."

The Paiute reservation lies about 50 miles north of Duncan's final stop, Las Vegas - Nevada's biggest and most diverse city. Duncan stopped for dinner at Bonito Michoacán, a Mexican restaurant and a local favorite as colorful as anything on the Vegas Strip.

Among a group of friends visiting from California, two will vote for president for the first time in 2020.

One of the friends said that she was primarily concerned about student loans.

"It's set up in a way where it kind of screws a person over at the end, you know?" another said.

Student debt is a concern for many young voters, but here – like everywhere "CBS This Morning" visited in Nevada – the conversation ultimately turned to immigration, a top issue in this state that's nearly 30% Hispanic.

"I would say immigration is, like, one of the biggest issues," one friend said.

"That's what I was going to say – the border," said another.

"I'm all for immigrants," said Elsa Cascos. "I'm an immigrant, but we have to do it the legal way."

Every State Has A Story

What matters in Colorado on Super Tuesday

California goes to the polls on Super Tuesday