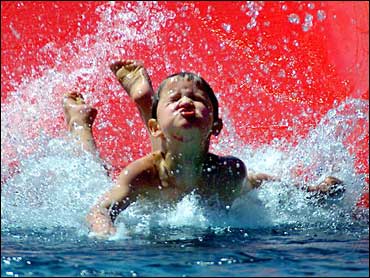 Now that the school year is coming to an end, parents are scrambling to find things for their kids to do this summer. I feel it's my duty to mention something you might not be aware of: Investment Camp. I'm sure there are others, but "YoungBiz," an organization for entrepreneurial youngsters, sponsors the one I saw on the Internet. Before you start making fun of it, you can be sure that those who came up with the idea are not idiots. They know that an Investment Camp would not be appropriate for a 10-year-old. That's why the minimum age is 11.

I used to be concerned that kids going to these alternative camps would miss out on character-building experiences I had like telling ghost stories or putting a frog in someone's bunk. But now that I'm an evolved parent, I've come around. Obviously, if a child has a passion for something like painting or dance, a parent should encourage him with the same enthusiasm as they would if the kid loved to play football or run the mile. But "Investment Camp?"

Does anyone actually think that today's generation of kids is not materialistic enough? Do they really need to be sent to a camp to learn how to exploit the system? I don't think it's a bad idea for kids to learn some things about business and the value of a dollar. But I'd be willing to bet my daughter's bond positions that very few of the kids who go to these camps live in homes where there is not enough emphasis on the importance of money. These are kids whose first jokes probably had punch lines like, "I pee? IPO."

One of the articles on the YoungBiz website, written by a thirteen-year-old was called, "How to Balance School and Business." Should young people really have this kind of dilemma? Children shouldn't be walking around depressed on days that the Dow happens to be down. What concerns me about these kinds of camps is that all too often, we just don't let kids be kids.

Instead of learning how to swim, one of the things this camp promises is that campers will discover how to "set short and long-term financial goals." I remember having the short-term financial goal of hoping to find a penny, and the long-term financial goal of putting away some money so I could see a movie on Saturday. The program also teaches youngsters how to read annual reports. Those aren't exactly the kinds of things we used to read in our bunks by the light of our flashlights. Instead of "Capture the Flag," they probably have spirited rounds of "Take Over the Corporation." And just imagine those mischievous boy campers, plotting to sneak over to their sister camp to peek at the girls' financial statements.

Another article that appeared on the website was, "Negotiating Your Way to a Bigger Allowance." I guess that's not so horrible. There are probably worse things than playing hardball against one's parents. But it's a short list. I can hardly wait until next month's posting. Maybe they'll do a feature called, "Grabbing Grandma's Portfolio - Does The Old Lady Really Need The Money?"