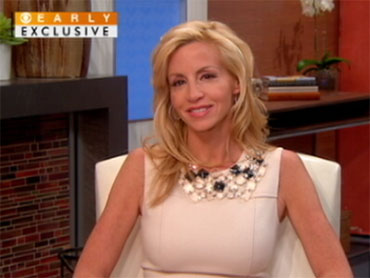 Before last year, Camille Grammer was largely known as one thing: the wife of "Frasier" star Kelsey Grammer. The couple has recently filed for divorce, but thanks to Camille's success as a reality TV star, she's making a name for herself.

"Early Show" co-anchor Chris Wagge reported that, throughout her 13-year marriage to Kelsey, Camille had kept a relatively low profile -- that is, until last year, when both her celebrity -- and her marriage -- exploded.

On "The Real Housewives of Beverly Hills," America watched as her husband left her for a one-year run in Broadway's "La Cage Aux Folles" -- and another woman.

While the "Frasier" star was living in New York, Camille learned he was having an affair with British flight attendant Kayte Walsh.

Camille says Kelsey broke the news that their marriage was over during a phone call.

"My husband called me and told me that he was done with our marriage," Camille said on the reality show.

Camille was devastated and filed for divorce in July, citing "irreconcilable differences."

But Camille won't find herself in financial ruin. She rejected Kelsey's first settlement offer of $30 million, demanding more money along with spousal and child support.

Because she never signed a pre-nuptial agreement with Kelsey, and co-owns their TV production company, it's been reported that Camille could walk away with around $50 million.

On "The Real Housewives of Beverly Hills," she has said, "It's time for me to come out of my husband's shadow and shine."

On "The Early Show" Thursday, Camille said the experience of learning she was being divorced via a phone call was "surreal."

She continued, "I had texted him several times and I called him and said, 'Please call me back.' And finally, three hours later, he called me and he said, 'I've been thinking about it, and I don't want to be married anymore.' And I was just devastated."

Camille said Kelsey was "becoming more distant" the longer he was working in New York.

"But I never expected for us to be, you know, going through a divorce," she said. "Or, you know, that he was going to leave me."

"It's very difficult," she said. "Well, divorce in itself is so difficult to go through. I mean, anybody knows who's gone through it. It's just so hard. And then to have to play it out on some reality TV show is, again, is surreal. It's hard to show up for camera and be camera-ready when you're crying the night before."

Camille said she didn't even want to do the reality show.

But Camille added there may have been an ulterior motive for her to do the show. "I can't speak for him," she said. "But maybe now looking back, could be."

As for the divorce settlement, Camille says numbers like $30 and $40 million are exaggerated. "We should be coming to a settlement agreement really soon," she said. "And yes, I do have a number in mind. I would like, you know, child support and spousal support. I think that's fair."

"My son Jude's been with him for the last two weeks," she said. "We decided that Jude needed to spend more time with his dad, because he was missing him. And you know, for awhile there, he wasn't. But he stepped up to the plate, and he's going to see them today."

As for Camille, she says she isn't in love anymore.

"When we were together, I loved my husband very much," she said. "But after everything I've been through, no. I can honestly say that I'm no longer in love with him."

But the show will go on for Camille -- even if she's painted a villain on "The Real Housewives of Beverly Hills."

Wragge pointed out on the cover of Life & Style magazine, Camille is described as "America's Most-Hated Housewife."

How does she take that kind of characterization?

Camille said, "My dad and I, we were vacationing in Hawaii, and my dad laughed for 10 minutes. He thought it was a riot. For me, it's hurtful, because I'm going through this terrible divorce and I see a headline like that. And you know, for my dad he reads it and he says this is absolutely ridiculous. So if he can take it tongue in cheek, it's good. You can't take that seriously."

Camille said the show does not accurately portray her.

She says she actually likes all of her co-stars.

"I like all the girls," she said. "Adrienne and I are friends. Lisa's reached out to me during this time. I'm very fond of all of the girls. Kyle and I are just like oil and water. Sometimes we get along. Sometimes we clash."

Camille says of the show, "Was it a good diversion? Yes. Am I happy with the outcome? I have mixed feelings."

She added she's in discussions with the show's producers to possibly come back for a second season.