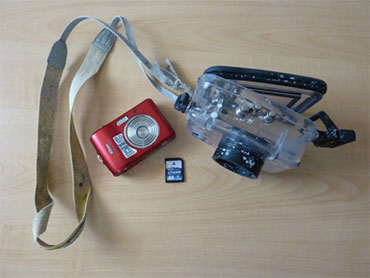 Paul Shultz was walking along the pier of a Key West marina when he saw what looked like a rotting tomato pounding against the rocks.

The Coast Guard investigator waded ankle-deep into the water to fish out the ocean rubbish: a bright red Nikon camera, small enough to fit in the palm of his hand. Its waterproof plastic case was covered with six months' worth of crusty sea growth, but the camera itself was almost pristine when he found it May 16.

However, clues to tracking down its owner were few. So Shultz decided to test his investigative skills.

There were photos of two men preparing to scuba dive and a towheaded family nestled together on a couch. There was a mysterious relic settled deep into the sea floor. And even a puzzling video clip of splashing water that appeared to have been taken as the camera thrashed around under the control of something that wasn't human.

"There was nothing on the pictures that said this camera belongs to so-and-so," Shultz said.

After looking through the pictures, Shultz adopted the screen name of "Aquahound" and took his hunt online.

He uploaded the images on Scubaboard.com, hoping some diving aficionados could help identify where they were taken. Within days, the Internet sleuths had parsed the pictures and found some clues all pointing to Aruba, a Dutch island off Venezuela's coast that's 1,100 miles from Key West.

There was a plane's tail number - and a computer search showed the aircraft was in Aruba the day the photo was taken. There was a blue-roofed building that searchers pinpointed to the island using Google Earth. And there was a school poster written in Dutch.

But could the camera make such a trip? Villy Kourafalou, an associate professor of physical oceanography at the University of Miami, said such an odyssey is possible. The buoyancy of the plastic case combined with various currents could have taken the camera to Key West, she told The Associated Press in an e-mail.

With Shultz's search narrowed, the resolution came quickly. He posted the pictures on the travel websites Cruisecritic and Aruba.com, and within two days was contacted by an Aruban woman who said she recognized the children in some of the photos as classmates of her son.

She contacted the family, the de Bruins, and all the pieces came together.

"I have a smile on my face ... I can't stop laughing about it," Dick de Bruin said in a phone interview from Aruba. "It's really big news (on the island) and in Europe." 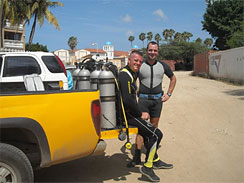 (AP Photo/Paul Shultz)
De Bruin, a sergeant in the Royal Dutch Navy, has been stationed with his family in Aruba for three years. The camera floated away from de Bruin while he and a dive team were salvaging an anchor from the USS Powell for a World War II memorial. The American ship protected Aruba, a major oil producer, from German forces during the war.

(Left: Dick de Bruin, left, and Toine van der Klooster, both members of the Royal Dutch Navy, prepare to scuba dive off Eagle Beach, Aruba, in this Nov. 11, 2009 photo. When posted online, Internet sleuths were able to identify the blue-domed building in the background as the Alhambra Casino in Aruba.)

"There's a big connection between America and Aruba ... first with the anchor, and now the camera brings us together again," de Bruin said.

The camera is on its way to the de Bruin family via FedEx and should be there any day.

Shultz said he's thrilled the story is ending well - for a brief moment when he first viewed the mystery video, he feared the camera's owner had met a tragic end.

There was footage of the divers recovering the anchor, and then in the next video, "the camera started thrashing around and a fin came into the picture," Shultz said. "Then 20 seconds in I realized there was no blood."

The culprit: a hungry sea turtle trying to take a bite out of the floating camera in January, two months after it was lost. The camera's leash apparently got caught on its flipper, and the animal's splashing turned on the video camera. Shultz's best guess is that the episode happened off the coast of Honduras.

That video clip has been seen more than 200,000 times on YouTube, with viewers everywhere from Alaska to Africa to Australia. It's de Bruin's favorite part of the whole story.

"When I told people what Paul had done, they were astonished. They didn't believe it," he said. "But we have the sea turtle on film proving the camera floated from Aruba to the U.S. It's unbelievable, but it's true."
By Associated Press Writer Annie Greenberg