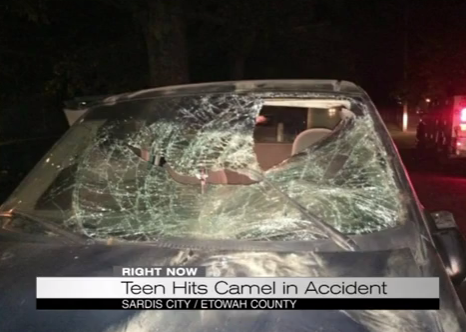 SARDIS, Ala. -- Far from the desert, a teenage driver collided with a camel on an Alabama road, injuring the driver and animal.

Sardis Police Chief James Harp tells The Gadsden Times that the camel’s owner was leading it across the road when the crash happened Monday evening.

The police chief said camel owner Terry Turk waved his arms to get the driver’s attention and leaped out of the way to avoid the car. But the camel crashed onto the hood, showering glass onto the driver, who was treated for minor injuries including cuts.

The chief said the camel had to be euthanized.

The animal trainer was not hurt, WIAT reported.

Turk’s Bama Bucks company’s website says in addition to breeding deer, its farm has also been home to other animals such as kangaroos and elk.