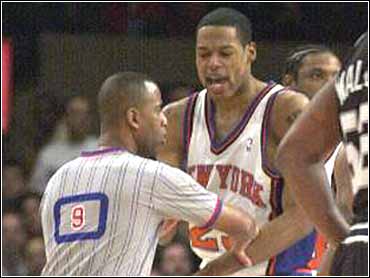 Knicks center Marcus Camby was suspended for five games and fined $25,000 by the NBA on Wednesday for trying to sucker punch San Antonio's Danny Ferry.

Ferry, who had poked Camby in the eye, was suspended for one game and fined $7,500.

Camby's wild, roundhouse punch did not strike Ferry because Knicks coach Jeff Van Gundy stepped between them at the last moment. Camby's head collided with Van Gundy's, opening a cut above the coach's left eye that required about a dozen stitches.

Van Gundy said he thought the punishments for Camby and Ferry were excessive.

"He got five games for not hitting a guy," Van Gundy said on WFAN. "I'm not here defending Marcus' actions. I said he was wrong, but the crime does not fit the punishment. Nobody's ever gotten five games for that kind of thing. No player got hurt."

Van Gundy noted that Toronto's Charles Oakley was suspended for only three games after hitting the Los Angeles Clippers' Jeff McInnis this season.

"I got punished twice - I got 15 stitches and then I got my player out," Van Gundy said.

As for Ferry, Van Gundy said, "I don't know why Ferry was suspended for a game. He hit Marcus in the face. Whether it was inadvertent, only Danny knows. For both players, the crimes and the punishments don't meet up."

Camby's outburst occurred after Ferry hit him the eye while he and Ferry jostled for rebounding position in the fourth quarter of New York's 104-82 victory on Monday.

After being restrained by one referee and speaking with another, Camby dabbed at his eye, saw blood and bolted toward Ferry near the scorer's table.

If Van Gundy hadn't stepped in the way, the punch might have connected and Camby might have faced an even longer suspension.

Ferry will serve his one-game suspension Wednesday night when the Spurs play at home against the Toronto Raptors. The Knicks are off until Friday, when they play the Pistons in Detroit.

"I regret that I lost my cool, bekaUwe that's not me," Camby said Tuesday. "Those who have been around me since I've been here know that I'm an easygoing-type guy. I just lost it when I saw that blood, and I was truly, truly in the wrong."

Camby wound up with scrapes above both his eyes one from being poked by Ferry, one from colliding with his coach. Van Gundy's eye also is swollen.

As Camby left the court, he grabbed a folding chair an action he admitted was "ridiculous" before a security official took it away from him. He stood outside the Spurs' locker room before beig persuaded to leave, then spent another 20 minutes in a tunnel near where the Spurs' team bus was idling.

Camby said he couldn't leave because his car was blocked and that he wasn't looking for more trouble.

He met with Van Gundy on Tuesday after speaking with several teammates by telephone Monday night.

"We talked about everything, about suspensions and all that," Camby said, "and he said, 'Despite all that, you played the best defense on David Robinson of anyone I've ever seen.' Coming from him, it was great ... and I respect him more today because of the conversations we had."

Camby is averaging 10.6 points and 11.1 rebounds as the starting center for the Knicks, who have won nine of their last 10 games.