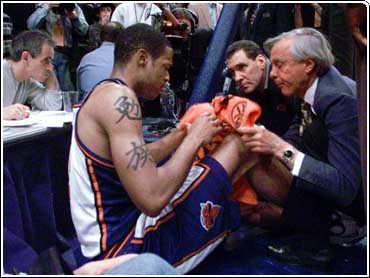 Marcus Camby's knee injury is not as bad as the New York Knicks had feared, meaning he is certain to return to the lineup this season, the team said Tuesday.

Camby's knee buckled when he was fouled by P.J. Brown of Miami on a fast break during the Knicks' victory Sunday over the Heat.

The team had said Camby had a partial tear of the anterior cruciate ligament, and an MRI exam performed Monday left the team wondering whether there might be a larger tear.

"Sitting there in the Garden on Sunday, that was very traumatic what we were facing," general manager Scott Layden said. "So we're very happy with the news we got this morning."

The Knicks wouldn't disclose the timetable for Camby's return. Originally, it was estimated he would be out 6-8 weeks.

Averaging 10.5 points and 7.7 rebounds, Camby has been the Knicks' best weapon off the bench.

"This is truly the best possible news for Marcus," said Dr. Norman Scott, the team physician. "MRIs in general can sometimes reveal worse news than the real diagnosis. That is the main reason why we decided to perform diagnostic arthroscopic surgery."

In other injury news, the Knicks said Larry Johnson (chip fracture in his foot) and Chris Childs (sore Achilles' tendon) would miss Wednesday night's game at Milwaukee. Allan Houston, who twisted his ankle in a loss to Charlotte on Tuesday, is expected to play.

Layden was trying to decide whether to make a roster move prior to the game against the Bucks.

New York had been interested in small forward Chucky Brown, who was released earlier in the week by San Antonio, but he was claimed off waivers Tuesday by Charlotte.