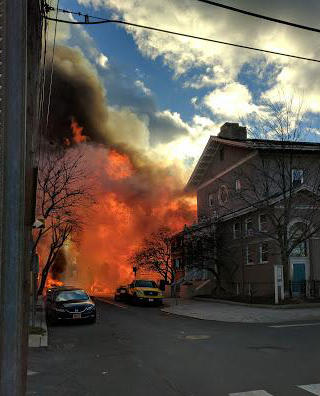 CAMBRIDGE, Mass. -- Firefighters battled a massive 10-alarm fire Saturday just outside Boston that started in the afternoon and raged on into the night, but ended up with what the fire chief called a “miraculous” outcome.

The fire was reported just before 3 p.m. on Berkshire Street and reached nine alarms about 30 minutes later, and eventually hit 10 alarms. The flames were lessened but still burning as of 11 p.m. Officials say the blaze Saturday is the largest Cambridge has seen since the 1980s, reports CBS Boston.

Flames extended to as many as 11 buildings in the area and several cars, according to Cambridge Fire Chief Gerald Reardon, as more than 130 firefighters from 17 or 18 companies worked to put out the blaze. It’s unclear what the extent of the damage is.

Power was shut off in the area of the fire because of overhead wires, and was expected to be out for the majority of the night. According to Eversource, 1,659 people in the area were without power at one point. As of 9 p.m., that number had dropped to 869. Firefighters are working with Eversource to make a plan to restore power to as many buildings as possible.

Reardon said there were five or six injuries from the fire, though none of the injuries were serious. All of the injured were treated by medics and released.

A fire of this size without death, Reardon said, is a miracle.

“This is a miraculous situation,” Reardon said. “This looked like a ball of fire across the street, it looked like something you would see in a war zone when they first showed up. The fact that it happened in daylight, and people were up and around and cognizant of what’s going on versus sleeping at night is obviously something  in our favor. We are very fortunate here that we’re not looking at a serious series of fatalities.”

“My sons were in the house when it happened,” Ann Camara said. “All the flames came right in. There’s so much smoke.”

The damage, which Reardon said varies from significant to total, is emotionally taxing for the resident.

“This looks like a third-world country after a bombing,” Reardon said. “It’s a lot of devastation.”

Firefighters were called in from Newton, Waltham, Wakefield, and multiple other towns.

Saturday night, Cambridge Mayor Denise Simmons said the city is housing residents affected by the fire. The city has also started a relief fund for the victims. People can donate to the fund at Cambridgema.gov/firefund.

“This is just to help families who may not have enough in terms of insurance or a place to go or clothing,” Simmons said. “And we have to remember it’s the holidays. We have so many families touched by this tragedy. So we want to be sure we’re able to lift up, protect and comfort those that have been touched by this devastation.”

Reardon said more than 60 people live in the buildings that burned.

The cause of the fire is still unclear. Reardon said the investigation into the cause will be “long and protracted.”