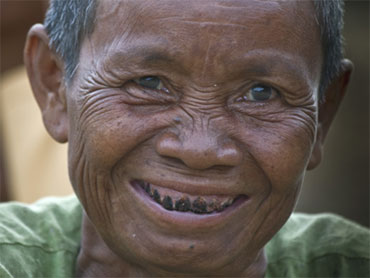 When pregnant Cambodian women suffer morning sickness, they often reach for an unlikely source of relief: a wad of chewing tobacco.

Many become hooked, and the World Health Organization warned Thursday it is a tradition putting the health of both mothers and babies at risk.

The largest tobacco survey ever conducted in Cambodia found that about half of all women older than 48 regularly chew tobacco, and about one in five rural women first took up the habit during pregnancy, to soothe their prenatal nausea.

The survey conducted by WHO and other researchers found that midwives are the country's biggest users of smokeless tobacco, with 68 percent chewing it. About half of traditional female healers use it as well.

"Chewing tobacco appears to be strongly influenced by beliefs passed on by older relatives," lead author, Dr. Pramil N. Singh from Loma Linda University in California, said in a statement. "The behavior is seen as a rite of passage into womanhood. Further research is needed to find out whether village health workers actively promote its medicinal use."

The tobacco leaves are typically mixed with lime and betel nut, a mild natural stimulant that produces a bright red juice and has been used for centuries across the Asia-Pacific. Cambodian women place the concoction inside their mouths for an extended period, increasing their risk of suffering oral cancer.

As with pregnant women who smoke, those who chew tobacco also put their babies at risk for problems such as low birth weight, decreased lung function and stillbirth.

"Some women believe that when they chew tobacco, they look better," said Dr. Mom Kong, director of the nonprofit Cambodia Movement for Health. "And some start chewing tobacco when they get pregnant to cope with morning sickness in the first trimester of pregnancy. Some crave something sour. But some women get addicted while using it during the pregnancy."

As many as three-quarters of all men in some Southeast Asian countries smoke cigarettes, but fewer than 20 percent of the region's women ever pick up the habit. While about half of older Cambodian women chew tobacco, only about 4 percent of them smoke, compared to nearly half of all men in the country.

Dr. Susan Mercado, WHO's tobacco control adviser for the Western-Pacific region, said it's common for women, men and children across the region to chew tobacco with betel nut, especially in the Pacific islands where cigarettes are sometimes unrolled and chewed. However, she was unaware of pregnant women using tobacco to lessen morning sickness symptoms anywhere but Cambodia.

"It's very, very concerning because the impact is not only on the woman but also on the unborn child, and the risk could be quite severe," she said. "Countries need to have very specific programs that target whatever kind of tobacco use is prevalent. Just because everyone is saying the big problem is second-hand smoke ... the problem may not be second-hand smoke for women, it's actually chewing."

The study, conducted from 2005 to 2006, involved about 14,000 adult Cambodians nationwide. It was published online in the Bulletin of the World Health Organization.