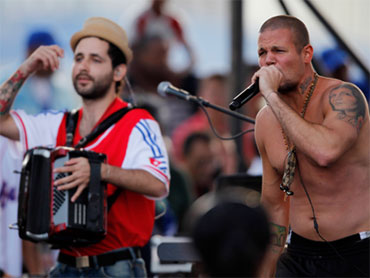 Puerto Rico's Calle 13 brought its edgy mix of reggaeton and hip-hop to Cuba's capital on Tuesday, rocking thousands of screaming fans from an outdoor stage while serving up a heaping dose of bitterness toward U.S. policy.

The Grammy-winning group played in front of towering Cuban and Puerto Rican flags as the sun set and foamy waves crashed against the famous Malecon boulevard that hugs the seawall along Havana's coast.

The thunderous show was held on a public square dubbed the "Anti-imperialist Plaza," located just a stone's throw from the U.S. Interests Section - which Washington keeps in Cuba instead of an embassy, since it has no formal diplomatic relations with the island.

Early on, lead singer Rene Perez screamed a string of profanity at the "building behind us," and kept up the verbal assault on the Interests Section as the evening wore on. The U.S. diplomatic mission was closed for the day by the time the show began.

The band also played "Querido FBI," or "Dear FBI," a song dedicated to Filiberto Ojeda Rios, alleged leader of a militant Puerto Rican nationalist group accused of using stolen millions to finance bombings and attacks. Ojeda Rios died in a 2005 shootout with the FBI at a remote farmhouse in Puerto Rico.

"He was a good boricua," Perez told Tuesday's crowd, using a slang term for Puerto Rican natives, "and they killed him."

Other Calle 13 members had the same shirts worn by Cuba's national baseball team, but Perez wore a distinct T-shirt which he pulled off a barely minute into the show, showing off his heavily tattooed torso.

"We're going to talk about sex, religion and politics," he screamed, leaning far off the stage to slap hands with members of the crowd who surged forward against a barrier and police.

Band members don't deny that playing Havana had political overtones - but said the crowd came for the music.

Tuesday's appearance will be followed by concerts in Miami, where Calle 13 expects a backlash from those who see its visit to Cuba as tacit support for the country's communist government. Perez said Monday the band is influenced by politics in most things it does, and is aware it's making a statement with the Havana show.

Cuban-American exiles in Florida who oppose the Castro government "are going to come at us, be all over us, but it's all the same to us," Perez said the before the show.

Most of the Havana crowd was in its teens or 20s, though entire families crowded onto nearby terraces and rooftops to catch a glimpse. Fans painted "Calle 13" across their bellies and faces.

The concert was new evidence that cultural exchanges between Cuba and the United States have become far more commonplace even though chilly political relations have not significantly improved since President Barack Obama took office.
By Andrea Rodriguez