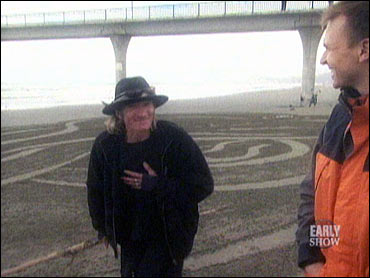 As the morning tide recedes at a beach near Christchurch, New Zealand, a man dressed in black arrives to go to work. After stretching and repeating his mantra, the man, Peter Donnelly, gets ready to "paint." In the sand.

According to Phil Keoghan, who visited with Donnelly, locals refer to Peter the Sand Dancer; "With a simple stick and a rake, and not-so-simple gift of vision, he paints elaborate works of art in the sand."

Donnelly has been creating his intricate, ornate, sometimes esoteric artworks for ten years -- more than 780 hundred in his career. Keoghan says, "Peter's intricate designs look like they take days to complete, but in fact, he does them in less than four hours, and they last only as long as the next high tide -- all the more impressive because at ground level, Peter can't really 'see,' only feel, what's he's doing."

"You've got to go through that . . . as an artist," explained Donnelly. "There's a healing aspect, like a love expression that occurs . . . I get emotional about it sometimes."

As the day progresses and his work becomes more elaborate, a crowd of close to 200 people stands silently around Donnelly, watching him create. Then, after four hours, the piece is completed -- and the tide begins to roll in.

"Well Peter, the tide is literally rolling up on your artwork now," Phil said.

But Peter was far from disappointed. "This is the beautiful moment. It's symmetry, a symmetry . . . it's finished now, it's born, it's had its life.
And the ephemeral nature of it, you know, the -- the fact that it is a gift to the universe and it's a gift to that ocean which -- you know, who knows what the ocean can take from what I say and what I give to it. You know?"

Adds Phil: "More than anything, Peter sees his art as a way to release his creative side and thankfully for all of us, he does it in a place we can all enjoy it."

To find out more about Peter's paintings, go to:

To find out more about tourism in New Zealand: