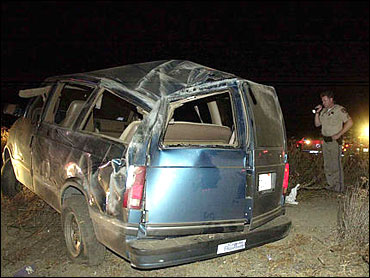 Motorists have become afraid to drive at night along a stretch of freeway outside San Diego, scared that a vehicle going the wrong way will come hurtling out of the darkness.

The wrong-way drivers are immigrant-smugglers trying to skirt a Border Patrol checkpoint in the pine-covered mountains east of the city.

The 30-mile stretch of Interstate 8, the main route between San Diego and the desert along the Mexican border, has been the site of deadly crashes and hair-raising close encounters for years. But commuters and California Highway Patrol officers say the wrong-way drivers have become an almost nightly phenomenon since the summer.

Smugglers seem to know that Border Patrol and CHP vehicles will not chase them as they speed westbound in the two eastbound lanes of I-8.

"I think they learned they get away with it," said CHP Sgt. Leslie Lazo. "It's just a recipe for disaster."

Immigrants usually cross the Mexican border on foot in the rough desert, then cram into a van or pickup truck headed north. As they approach the flashing lights of the westbound I-8 checkpoint, where two Border Patrol officers peer into vehicles and search any deemed suspicious, smugglers steer up a 20-yard slope into the eastbound lanes, often at night with their headlights turned off.

Mary Schoepper, a 67-year-old real estate broker who lives about three miles from the border, has been behind the wheel in two near-collisions with wrong-way drivers since spring - one at night and one in the middle of the afternoon. Now, she checks into motels rather than drive home after late nights at work.

Sandy Williams, 55, nearly collided with an oncoming pickup truck as she approached the Border Patrol checkpoint one night last year with her two grandchildren. She estimates the truck was going 70 mph, headlights off. She swerved twice and spun out in the dirt.

"I get shivers just thinking about it," she said.

On Aug. 31, a Chevrolet Astro Van drove against oncoming traffic for about 17 miles before swerving back into the westbound lanes. The van, reaching speeds of about 100 mph, spun out of control and crashed, injuring 19 suspected illegal immigrants. The driver escaped.

In June 2002, a van carrying 27 people collided with a Ford Explorer: Five people in the van, including the driver, were killed, along with a man in the sport utility vehicle.

The wrong-way driving is said to reflect growing desperation among smugglers since federal authorities in 1994 made it harder to cross the border between Tijuana and San Diego. The stepped-up patrols near metropolitan San Diego have led immigrants to try to cross the border farther to the east.

Neither the Border Patrol nor the CHP keeps statistics on wrong-way drivers, but the outbreak appears concentrated in rural San Diego County. Authorities in Arizona and in El Paso, Texas, said they have not seen similar increases.

Local officials and residents are clamoring for help - including calling for a guardrail on the dirt median, more lighting and metal spikes on entrance and exit ramps. But the problem defies easy answers.

San Diego County Supervisor Dianne Jacob is suggesting a median guardrail that would run about 30 miles from the checkpoint to where the open desert begins. But she admitted that may just push smugglers farther east.

And Pedro Orso-Delgado, a state Transportation Department district director, said a guardrail may only encourage smugglers to drive on the wrong side of the freeway for longer distances.

In other smuggling corridors, motorists have defeated metal spikes by laying plywood boards over them or using tires filled with gel.

For now, the CHP relies on portable spikes - a suitcase-size device that, when rolled across the freeway, lays down 110 hollow nails. And the agency this month assigned more squad cars to the stretch of highway.

Jenny Putnam, 39, was approaching the checkpoint one July morning when she saw a Lincoln Continental pull a U-turn just before the checkpoint, situated about 40 miles east of San Diego. The Lincoln sped toward her at about 100 mph.

"We were all just swerving to get out of the way," she said. "It was a split-second reaction from everyone."

Wade Rowley, 47, said he may prohibit his teenage son from driving home from work at night and ask his daughters to avoid school activities that require driving after dark.

"It's just a matter of time before there is more carnage on the road," he said.