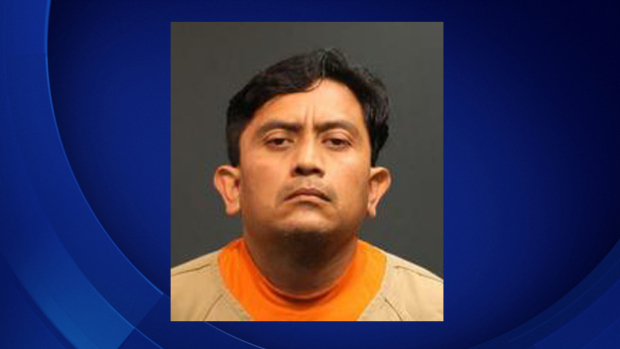 SANTA ANA, Calif. - A woman who disappeared as a teenager a decade ago was reunited with her family after she went to police and told them her mother's ex-boyfriend drugged and kidnapped her in 2004, forced her to marry him and fathered her child.

Isidro Garcia, 41, of Bell Gardens, was arrested on suspicion of kidnapping for rape, lewd acts with a minor and false imprisonment, the Santa Ana Police Department said.

Police described a decade during which the woman - abused mentally, physically and sexually by her captor - was moved at least four times and given multiple fake identities to hide her from family and authorities.

According to police, Garcia told her that her family had stopped trying to find her, and that if she tried to contact them they would be deported to Mexico. At first she was locked up, but she eventually began to lead what appeared from the outside to be a normal life.

"Even with the opportunity to escape, after years of physical and mental abuse, the victim saw no way out of her situation," police said in a written statement.

Neighbors were stunned, describing the couple as seemingly happy. They doted on their young daughter and liked to host parties at their apartment in the working-class community of Bell Gardens, about 20 miles from where she originally disappeared.

"He treats her like a queen. He does his best to do whatever she wants," next-door neighbor Maria Sanchez said in Spanish.

The now-25-year-old woman, whose identity is not being released, first contacted authorities Monday - the same day Garcia was first arrested. Police said she came forward to police after finding her sister on Facebook.

The girl arrived from Mexico in February 2004 to join her mother and sister in Santa Ana, about 30 miles southeast of downtown Los Angeles. She had entered the United States illegally and spoke no English.

Garcia followed the girl. When he caught up with her, she said she had a headache and wanted to go home.

Garcia began threatening the girl and gave her five pills that he said would help her headache but instead knocked her out.

When the girl awoke, she was locked in a garage in Compton, a city between Santa Ana and Los Angeles.

The mother "filed a police report and for 10 years (police) did due diligence. But they were changing their names and dates of birth and physical locations so that made it exceedingly difficult," Bertagna said.

One woman who knew the girl's mother told the Los Angeles Times that the mother may have initially believed her daughter ran away with Garcia willingly.

"She couldn't understand how her daughter could leave," Araceli Ochoa said in Spanish.

In 2007, Garcia got documents from Mexico that gave the girl a new name and date of birth. Using those documents, he married her at a courthouse. He fathered a girl with her in 2012.

"He changed her name - usually the middle name - date of birth, so they could get married," Bertagna said, according to CBS Los Angeles. "He had control of her life."

Garcia secured two jobs for them on a night cleaning crew so he could keep watch over her. She tried to escape twice but was severely beaten.

Recently, she found her sister on Facebook and they started to communicate. She also learned that her mother had indeed tried to find her, going to a Spanish-language television station and newspaper in 2004.

She started reflecting on her own child's situation and realized she needed to leave, Bertagna said. On Monday, she went to police in Bell Gardens and reported that she was a victim of domestic abuse. She also told them of her abduction.

Police arrested Garcia on Monday during a traffic stop in Bell Gardens. On Tuesday, Santa Ana police arrested him on the kidnapping and other charges, and also interviewed him.

Garcia was expected to be arraigned Thursday.

Neighbors near Garcia's apartment in Bells Gardens said they were shocked by the news. They knew the suspect as Tomas Madrano and described him as a devoted family man who worked hard to provide for his wife and daughter.

They said the couple was known in the neighborhood: He worked at a food-service company down the street from their apartment while she worked as a janitor at a nearby business. The couple attended church a block away, and they were known for parties where they would hire mascots and hold a raffle for children in the neighborhood.

"I'm astounded she waited so long to say something," said Rita Salazar, who lived across the street from the couple and said she never saw any signs of trouble.

The case comes just over a year after kidnapping and rape victims Amanda Berry, Gina DeJesus and Michelle Knight, three women who had gone missing separately about a decade earlier while in their teens or early 20s, were rescued from a house in Cleveland.

In 2009, Jaycee Dugard, 29, was rescued after 18 years in captivity. She was 11 years old when she was kidnapped in 1991 by convicted rapist Phillip Garrido and his wife, Nancy. The couple kept her prisoner at their home in Antioch, California, during which time she bore two daughters fathered by Phillip Garrido.

Elizabeth Smart, who was kidnapped from her Utah bedroom at 14 and held captive for nine months, told The Associated Press that outsiders cannot know what victims are going through and should not question why the woman didn't escape sooner.

Smart, now 26, faced similar questions after her 2002 ordeal. She was repeatedly sexually assaulted and her captors moved her around Utah and California while threatening to kill her family if she tried to save herself.

"We don't know what these evil people are holding over them - whether it's their families' lives, their lives, whatever it is," Smart said. "We just don't know."

A prominent psychiatrist who helped define Stockholm syndrome, in which victims of abduction begin to sympathize with their captors, said determining why a victim resists possible escape even when an opportunity is available is not an exact science.

Dr. Frank Ochberg said the relationship can sometimes involve a "trauma bond," whether it's a physically abusive marriage or a kidnapping situation.

People in this situation become "infantilized, dominated. They end up being attached to the person who dominates them, much like a child," Ochberg said.

Small gifts of kindness from a captor, such as a bit of food or a trip to the bathroom, can create positive feelings within the victim.

"Someone takes away the fear, the isolation, and we have positive feelings," he said. "That could be the beginning of a trauma bond."

In other cases, it can be more rational. "They know the risks of escape, and they don't want to take the risk," Ochberg said.