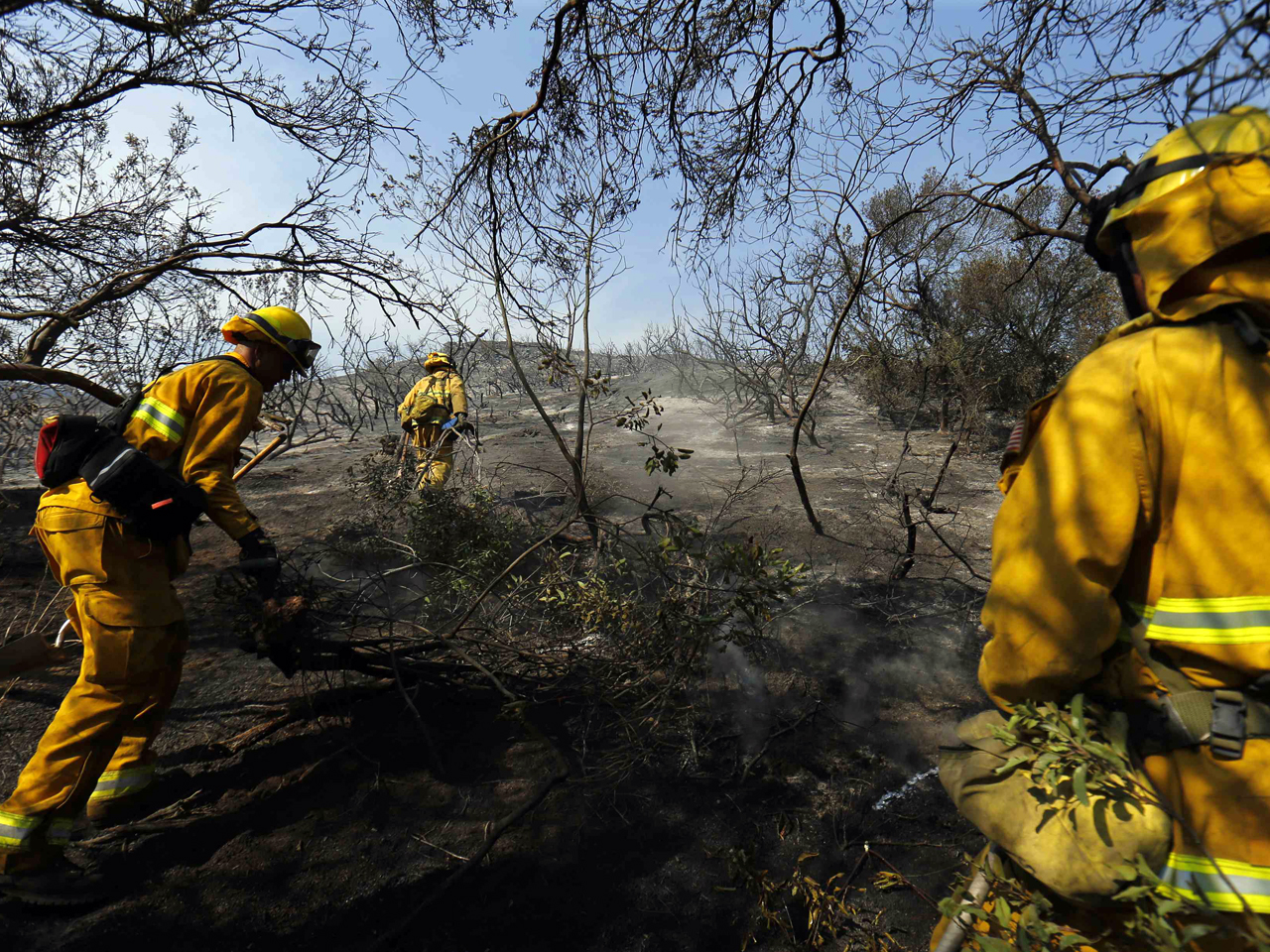 SAN DIEGO -- A 57-year-old man has been charged with setting one of 10 wildfires that swept the San Diego region this week.

Alberto Serrato pleaded not guilty Friday to arson in connection with a 105-acre fire in suburban Oceanside - one of the smaller fires. The fire started Wednesday and is fully contained.

Tanya Sierra, a spokeswoman for the San Diego County District Attorney's Office, said witnesses saw Serrato adding brush to the flames near homes but he was not seen starting the fire. The spokeswoman said he had not been connected to any other fire.

The spokeswoman said Serrato was arrested Thursday in Oceanside and faced up to seven years in prison if convicted.

Meanwhile a third wildfire ignited on the Camp Pendleton Marine base on Friday prompting Marine Corps officials to order all nonessential staff to leave.

The Marines say the new blaze cropped up in the northwest section of the sprawling coastal base between Los Angeles and San Diego, causing evacuations of military housing and an infantry school.

The other fire sparked Wednesday on the eastern outskirts of the Marine base scorched nearly 10 square miles of dry brush.

Flames came close to a large housing and office complex.

David and Sherri Roberts were able to see what was left of what they used to call their paradise. Their house was destroyed.

A sudden shift in the wind pushed the fire right into the Roberts' home, though firefighters were able to protect homes on neighboring hillsides.

"And they told me, they said, 'If the wind ever changes we'll be back here and we'll protect you,'" David Roberts said. "Wind changed, never saw them again."

The fires have now burned more than 19,000 acres in and around San Diego County. Damage is estimated at more than $20 million dollars.

At least eight houses, an 18-unit condominium complex and two businesses have been destroyed since Tuesday. The hardest-hit areas were in San Marcos and Carlsbad, a suburb of 110,000 people that lifted evacuation orders late Thursday.

In San Marcos, the wind was so fierce it created so-called "firenados" - fast-moving swirls of intense flames. Over a two-and-half hour period, what started as a few puffs of smoke soon blackened the sky.

California Department of Forestry and Fire Protection spokeswoman Lynne Tolmachoff said Friday that sparks from faulty construction equipment working on a graded field caused the first of the string of blazes. The fire that erupted Tuesday and charred more than 1,500 acres in the Rancho Bernardo suburb was ruled accidental.

The causes of eight other wildfires that broke out the next day and the blaze at Camp Pendleton that started on Thursday have not been determined.

Firefighters found a badly burned body Thursday in a transient camp in Carlsbad - the first apparent fatality - and a Camp Pendleton Fire Department firefighter was treated for heat exhaustion.

This week's unseasonably early wildfires have driven tens of thousands from their homes and shut down schools and amusement parks, including Legoland, which reopened Thursday.

In Escondido, just southeast of San Marcos, Al Said stood in front of his spared home on Friday and pointed out two burned neighboring houses. He chose not to evacuate and used a garden hose to help firefighters save his home.

"By the grace of God and the hard work of these firefighters, they came in and they saved my house right here," he told The Associated Press. "It was pretty touch and go. Just an awesome sight when you see that fire come through. It's just terrifying."

Firefighters have worked in temperatures sometimes topping 100 degrees this week. Friday's temperatures to peak around 90 and winds were to be lighter. A bigger cool-down was forecast for the weekend.

It could take months to find the causes of the blazes. San Diego County Sheriff Bill Gore said arson will be among the many possibilities that investigators will look at.

Police in Escondido arrested a teen and adult for investigation of arson in two small fires that were extinguished within minutes in a park area near a mall. Lt. Neal Griffin said Friday authorities are not ruling out anything yet but have found no evidence linking the two to the 10 large blazes.

Crews along with engines and aircraft were ready to spring into action when the first fire ignited Tuesday after being sent to the region in anticipation of a heat wave and gusty winds.

The positioning of crews was among several steps fire officials say they have been fine-tuning since 2003 when the San Diego area experienced one of the worst infernos in California's history. Communications between firefighting agencies has improved, residents are notified more quickly when to evacuate, and more aircraft are available to dump water on fast-moving flames.

San Diego County had some of the strongest Santa Ana winds Wednesday, with gusts reaching up to 50 mph, which may have set conditions for fires to be easily ignited, just as they were in 2003. The 2003 Cedar Fire scorched more than 437 square miles, nearly 3,000 buildings - including more than 2,000 homes - and killed 15 people before being contained.

The tragedy led to California creating one of the world's most robust firefighting efforts, which resulted in the smooth evacuation of thousands this week and crews able to save hundreds of homes from being consumed by the fast-moving wildfires, said Battalion Chief Nick Schuler of the California Department of Forestry and Fire Protection.

Before another devastating wave of fires swept the San Diego region in 2007, the city and county introduced a system of automated calls to homes and businesses. Previously, evacuations were accomplished by going door to door or driving down the streets with loudspeakers.

Upgrades at dispatch centers have allowed firefighting agencies to share resources far more quickly by computer, a contrast to 2003 when agencies had to pick up the phone to move engines around, said David Allen, division chief for the state firefighting agency.

There is also a stronger relationship between the state firefighting agency and the military, which had 22 aircraft fighting the fires Thursday.

Those procedures are expected to be tested further as drought-plagued California heads into the summer months of what is expected to be one of its busiest firefighting seasons yet.