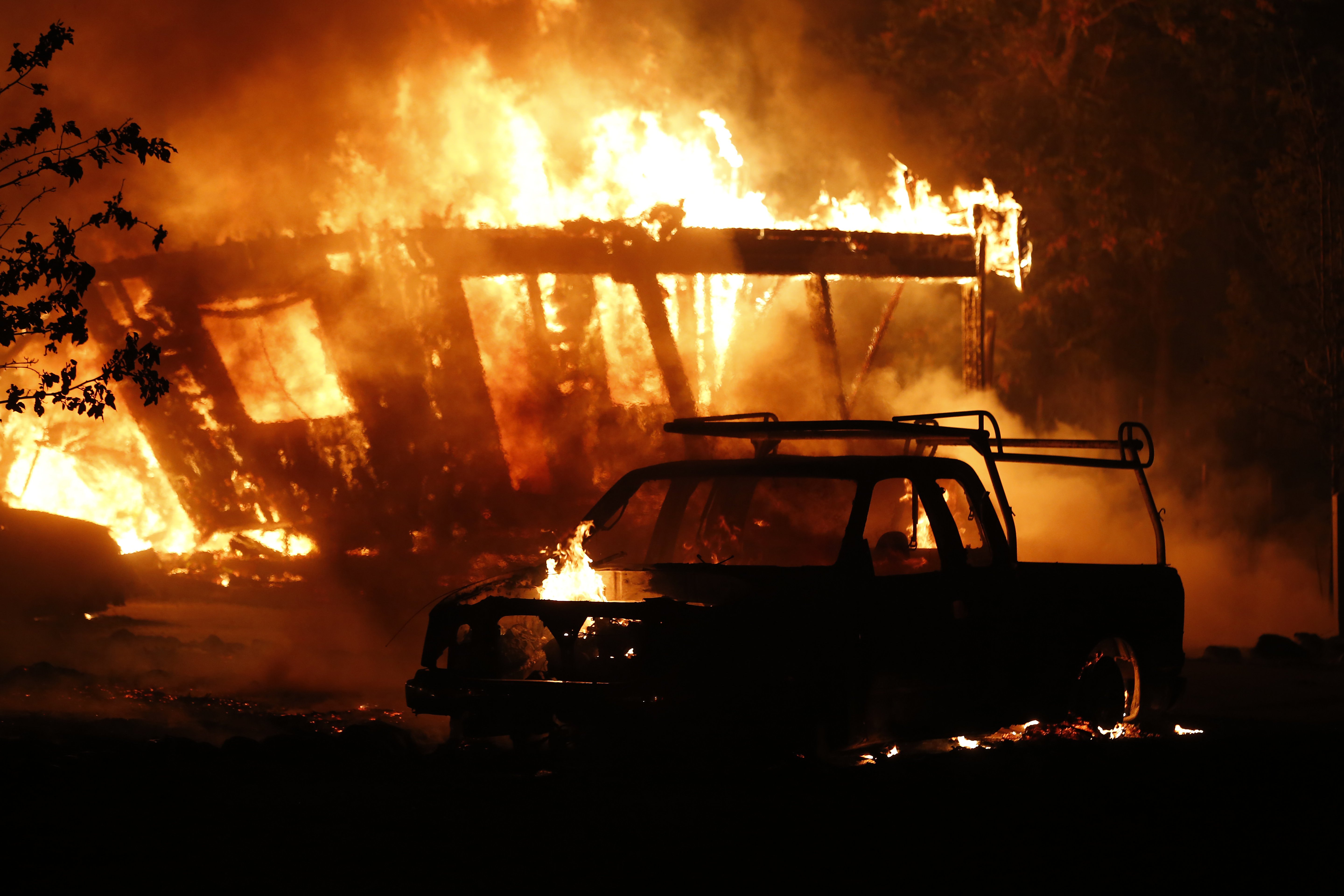 MIDDLETOWN, Calif. -- California fire officials said a wildfire north of San Francisco destroyed another 162 homes, raising the number of homes destroyed to 1,050 and making it the fourth worst wildfire in the state's history.

The tally announced Sunday brought the total number of homes destroyed in two wildfires burning in Northern California to nearly 1,600, the California Department of Forestry and Fire Protection said. Those fires killed five people, and on Sunday, authorities announced that a body was found in the ashes of a wildfire in Monterey County that destroyed or damaged 10 homes.

Firefighters found the man's body inside a charred vehicle after the fire began Saturday near the community of Jamesburg. Investigators were investigating his death as a possible suicide, Monterey County Sheriff's spokesman John Thornburg said.

So far, the blaze in Monterey County, being called the Tassajara Fire, has burned 1,200 acres, reports CBS San Francisco.

A firefighter lost his home while battling the blaze, said Eric Walters, a spokesman for the Cachagua Fire Protection District.

"I was out fighting the fire on the other end, and then my whole place burned down," Bob Eaton, a volunteer firefighter with the Cachagua Fire Protection District, told the Santa Cruz Sentinel. "My parent's house, right below me, it burned down. And my neighbors up on top, their place is burned down."

Eaton said firefighters' quick response to the blaze wasn't enough to save some of the homes. "It just went so damn fast," he said of the spread of the fire.

The Monterey County Sheriff's Office postponed to Monday plans to let evacuees from that fire check on their homes Sunday, reports CBS San Francisco. No one will be allowed back without a sheriff's deputy escort, the station added.

The blaze was one of 10 active wildfires Sunday, most of them in Northern California that continue to threaten thousands more homes.

Damage-assessment teams have counted 1,050 homes burned in Lake County, many of them in the town of Middletown, CalFire spokesman Daniel Berlant said.

The teams have completed about 80 percent of damage assessment, focusing largely on homes, Berlant said. They have not determined how many additional structures, such as sheds, barns and other outbuildings, were destroyed.

The fire, which killed at least three people and charred 118 square miles, was 69 percent contained. About 6,500 homes remained threatened by the fire, considered the fourth worst fire in California history based on total structures burned. A 1991 fire in the Oakland Hills ranks as California's deadliest and its worst in the number of structures (2,900) destroyed.

Meanwhile, another 545 homes were destroyed by a separate blaze that killed at least two people and that has burned 110 square miles in the Sierra Nevada foothills. That blaze was 72 percent contained Sunday. Even though it continued to threaten thousands of structures, all evacuation orders were lifted.