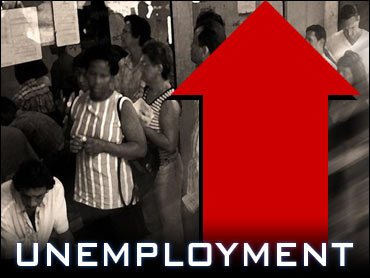 The jobless rate announced Friday by the state Employment Development Department represents an increase from the revised figure of 8.7 percent in December.

A year ago, California's unemployment rate was 6.1 percent. Since then, steep declines in the construction, finance, information and retail industries have put thousands out of work.

"They're confirming what we already know, which is that we're in a very, very deep recession that is going to last for many months," Levy said.

Nonfarm payroll jobs declined by 494,000, or 3.3 percent, from a year ago, according to the state's survey of California businesses. A separate federal survey of households showed a drop of 283,000 jobs from December, or a loss of 437,000 jobs from January 2008.

Of California's jobless, nearly 1 million had been laid off while about 127,000 left their jobs voluntarily. The others were new to the labor market or were trying to re-enter.

In a statement, Gov. Arnold Schwarzenegger said the unemployment numbers released Friday are "a sobering reminder" that rejuvenating the state's economy should be government's top priority.

"It is extremely important that we put people back to work. This is why we negotiated all the extra pieces in the budget," Schwarzenegger said during a Friday campaign event in Fresno to promote six budget-related measures that will appear on the May 19 special election ballot.

The last time California's unemployment rate was over 10 percent was during a 12-month period that ended in June 1983.

Construction, manufacturing, transportation, trade, information, and professional and financial services were among the sectors posting the biggest losses, according to the figures released Friday. They lost a combined 86,700 jobs over the past month. Adding the hospitality and leisure industries, those sectors lost 537,000 jobs from a year ago.

"It looks like California's precipitous manufacturing decline continues," said Gino DiCaro, spokesman for California Manufacturers and Technology Association. "Since January 2001, we have now lost close to 500,000 manufacturing jobs in California. That's a quarter of California's industrial base, and those are simply high-wage jobs that California can't afford to lose."

DiCaro said his group has studied private sector vs. public sector job growth since 2001 and found that the private sector accounts for just 15 percent of new jobs.

"California's got a lot of work ahead of it to improve the job climate in the state," he said.