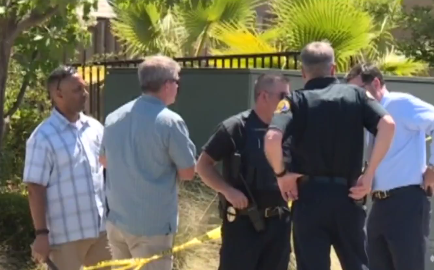 ROCKLIN, Calif. -- A teenage boy accused of killing a 13-year-old girl fled from their northern California home after her mother found the body in a bedroom and was caught after a short manhunt, police said Wednesday.

Authorities were trying to determine the relationship between the 14-year-old boy and the victim, Ashley Wood, who lives in the same house. Her mother discovered the girl dead Tuesday in her bedroom in the affluent community of Rocklin, about 25 miles northeast of Sacramento.

"Yesterday was a very dark day for our Rocklin community," said Rocklin Chief of Police Ron Lawrence in a release, CBS Sacramento reported. "On behalf of the Rocklin Police Department, I send our heartfelt condolences to the victim's family. Words cannot adequately express our deep sorrow for all involved."

It appears she died of head injuries, police said. The boy ran, and authorities tracked him down after about 40 minutes and arrested him. Police won't identify the boy because he is a minor.

Police have not yet interviewed the victim's parents to determine the teens' relationship because they were too distraught, police Capt. Lon Milka said.

"We will give them time to get through this," Milka said.

The 14-year-old suspect has been taken to the Placer County Probation Juvenile Detention Facility in Auburn, CBS Sacramento reported.

Neighbors told Sacramento television station KCRA that the residents of the house kept to themselves.

"Well, most of the time (they) were inside the house," Mary Alvarez said. "You know she got a swimming pool and always taking good care of the kids. I don't know what happened."

The death marks Rocklin's first homicide since 2013 and the fourth since 2003.