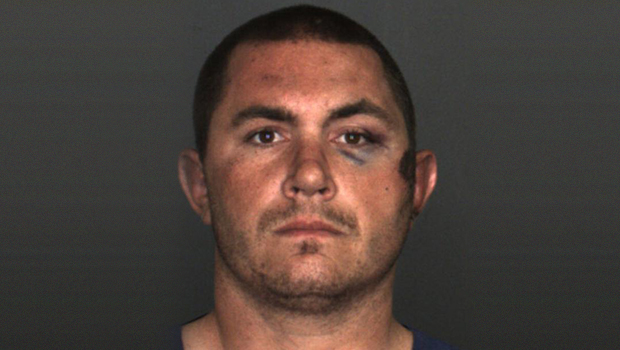 SAN BERNARDINO, Calif. -- A Southern California sheriff has placed 10 deputies on paid administrative leave after news video recorded a violent arrest that he says appeared to be excessive force.

According to McMahon, Pusok fled by car and then on a stolen horse when deputies tried to serve a search warrant in an identity theft investigation Thursday afternoon in the community of Apple Valley.

McMahon said an internal investigation has begun on the use of force. In addition, two criminal investigations are underway, looking at Pusok's actions and the deputies' conduct.

Deputies were "familiar" with Pusok's criminal history prior to the pursuit, according to the sheriff, who said he was "disturbed and troubled" by what he saw in the video recorded by a helicopter crew from Los Angeles station KNBC.

In the footage, deputies are seen firing Tasers, bringing Pusok down.

While on the ground, two deputies appear to unleash a fury of kicks, knees and punches to Pusok's head and body with his face down and hands behind his back.

"The video surrounding this arrest is disturbing, and I have ordered an internal investigation be conducted immediately," he said in a statement. "In addition, members of the Specialized Investigation Detail are responding to conduct the criminal investigation."

Pusok's family attorney Jim Terrell told CBS Los Angeles he believes the footage "is far worse than Rodney King" and has called for the termination and arrests of the deputies seen in the beating.

"I couldn't believe it. The first thing I said was, 'They can't do that.' That is first thing out of my mouth was that, 'They cannot do that,' " said Jolene Bindner, Pusok's girlfriend of 13 years.

Bindner described Pusok as a great father but admits he's had several run-ins with the law.

"I'm not gonna stand here and say that he's perfect, because who is?" Bindner asked.

"I want to know what these cops' past records are. Did they just start being thugs or have they been thugs for years?" said Terrell, who wants the FBI to investigate the department's handling of his client.

The department has not indicated whether the officers will be punished.

"These are bad cops, whether it's Ferguson, Missouri, or right here in Apple Valley. This stuff's got to stop," Terrell said.

Pusok has been hospitalized with injuries he is expected to survive, and three deputies were injured in the search, according to authorities.

His family is considering a civil suit.