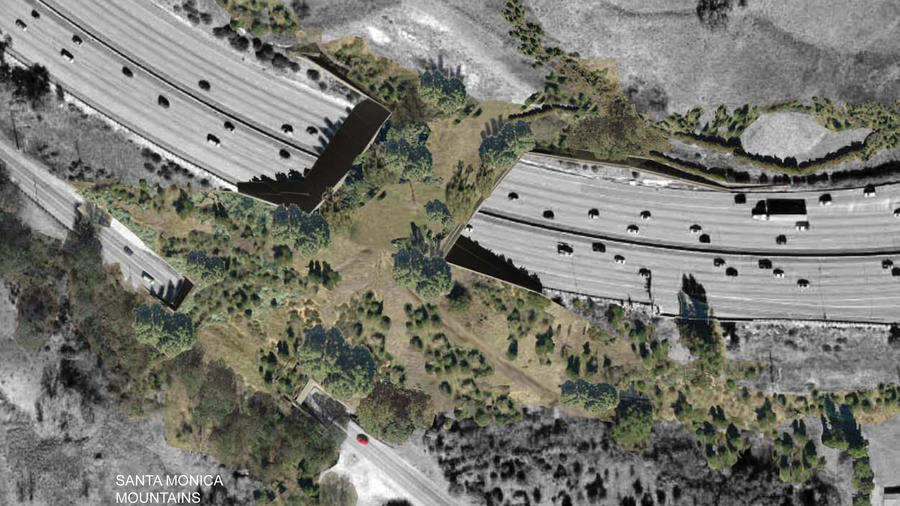 California is unveiling big plans for a more than $30 million overpass across one of L.A. County's busiest freeways.

The bridge is designed for wild animals whose habitats are shrinking because of urban sprawl and it could help save one of the last big carnivores in the western U.S., reports CBS News correspondent Ben Tracy.

P22 is the most famous mountain lion in the world and he lives in the shadow of the Hollywood sign in Los Angeles' Griffith Park.

Three years ago, biologist Jeff Sikich of the National Park Service attached a radio collar to P22's neck. That was shortly after remote cameras discovered the big cat inside the park, a place visited by 10 million people each year.

To get there, P22 had to navigate L.A.'s maze of freeways. He was born in the Santa Monica Mountains and somehow crossed the busy 405, made his way through the Hollywood Hills, and then crossed the 101 before taking refuge inside the Griffith Park.

"Would you want to cross the 101 on foot? I wouldn't," National Wildlife Federation regional director Beth Pratt said.

She said P22 got lucky. Just this month, another mountain lion, P32, became at least the 12th lion killed trying to cross the freeway.

"They get to freeways and, more often than not, the car wins," Pratt said.

Fifteen other mountain lions are now being tracked in the Los Angeles area, many first tagged as kittens. Adult males can roam 250 square miles to mate, but are now caged in by freeways. Inbreeding, out of necessity, has damaged the gene pool.

P22 has just 8 square miles to call his own and no one to mate with.

"These freeways are acting as barriers for animals who need to travel and so we need to help wildlife somehow maneuver them if they're going to have a future anywhere," Pratt said.

The California Department of Transportation released renderings Thursday of a proposed crossing over the 101 Freeway. It would be the largest animal bridge in America.

Conservation groups are working to raise $10 million to get the project started and so far no taxpayer dollars are involved.

The crossing would allow all sorts of wild animals in the urban jungle to once again roam the entire Santa Monica Mountain ecosystem.

"I think we owe it to them to give them back their wild spaces. We've taken so much of their habitat," Pratt said.

And the project might not even be that tough of a sell.

"There has been an outpouring of support for this campaign that, in my 25 years in conservation, I've never seen," Pratt said.

P22 is now the 120-pound poster boy for the movement to get the overpass built.

He recently made more headlines when he strolled into a Griffith Park neighborhood. He hid underneath a house and then disappeared once everyone left him alone. It was a reminder that he has few places to go, unless people bridge the gap for him.

"P22's story has sort of captured the imagination of the world. So, I know we're going to get this done," Pratt said.