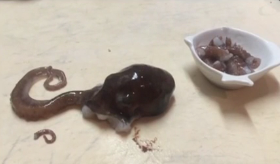 SAN FRANCISCO  — Some California restaurants are under fire from PETA for serving the marine delicacy — octopus — while it’s still alive and moving, CBS San Francisco reported.

A video shot by a PETA member shows a chef cutting up a live octopus.

PETA wants to ban the consumption of live animals, but it’s a big draw for restaurants like Santa Clara’s Crab House where a traditional Korean dish featuring live octopus is served.

The assembly member in that district said it’s a cultural tradition and he doesn’t want to interfere.

Animal rights activists however are petitioning California lawmakers to prohibit restaurants from serving live octopus, shrimp and other marine life.

PETA released a petition on Tuesday, along with a video of an octopus writhing as its limbs are severed by a chef at T Equals Fish, a Koreatown sushi restaurant in Los Angeles.

About a dozen restaurants in California and New York serve live octopus, according to PETA. Live octopus is most commonly used in a dish comprised of moving octopus tentacles, called “sannakji,” PETA said.

PETA said octopuses, which are considered among the most intelligent invertebrates, are capable of feeling pain just as a pig or rabbit would.

“Octopuses have sophisticated nervous systems that are rich with pain receptors, so they suffer immensely for a diner’s fleeting taste experience,” PETA vice president of cruelty investigations Daphna Nachminovitch said in a statement. “PETA is calling for an end to this disgusting, uncivilized, grossly inhumane, and gruesome practice of hacking up and serving live, sensitive animals.”

T Equals Fish could not immediately be reached for comment.