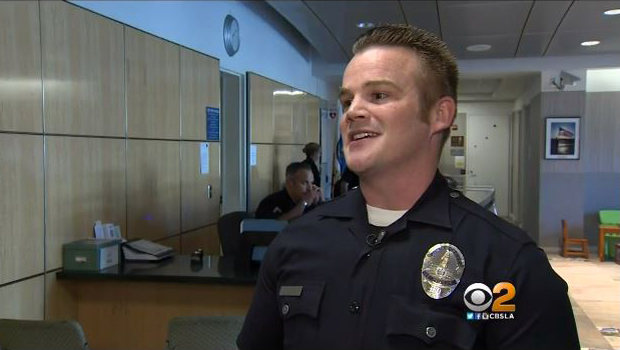 LOS ANGELES -- Video of a Los Angeles police officer comforting a toddler who police say was left behind after a crash over the weekend has gone viral, CBS Los Angeles reports.

When LAPD Officer John Neal Cooke arrived on scene to the crash early Saturday morning, he thought it was just a typical hit-and-run: A vehicle had struck a fire hydrant that was spewing water.

"Witnesses tell us, 'Hey, there was only one person involved, one car involved, and she went running down the street,'" he said.

But it turned out the crash was anything but typical when he said another officer checked the back seat and said, "You guys, there's a baby in here."

Police said the 2-year-old boy had been left by himself by his 27-year-old mother who crashed and then took off.

"He was crying and reaching for me, so I mean it's kind of just human nature," he said.

In the clip, Cooke is seen patting the little boy on the back and giving him his bottle, something he says he's used to in a big family.

"I've been taking care of kids since I was kid as they say," he said.

A seven-year veteran of the LAPD, Cooke said he's never seen such a careless act.

"It was pretty shocking to think not only did she leave him at all but the fact she left him in such a dangerous situation," he said.

Police said the woman, who they suspect was intoxicated, was found and arrested.

The child was taken to a hospital and then placed in the custody of the Los Angeles County Department of Children and Family Services.

But Cooke said he believes he's with relatives now and said he plans to visit very soon.

"It was really comforting to us that we were able to be there for him," he said.

Records show the woman has bailed out of jail, but she is expected to face child endangerment charges, authorities said.