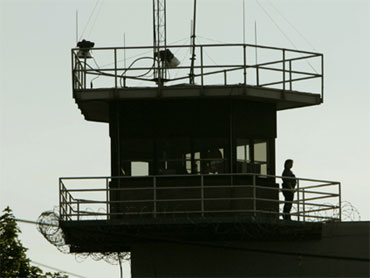 (AP Photo/Darron Cummings)
Citing an overcrowded prison system that has led to inadequate health care for inmates, a panel of federal judges has ordered California to reduce its prison population by 40,000 over the next two years.
That reflects a roughly 27 percent cut from the current population of 150,000.

The New York Times, which has a PDF of the court order, reports that "judges said that reducing prison crowding in California was the only way to change what they called an unconstitutional prison health care system that causes one unnecessary death a week."

The Los Angeles Times, meanwhile, notes that "[t]he order cited Gov. Arnold Schwarzenegger's own words when he proclaimed a state of emergency in the corrections system in 2006 and warned of substantial risk to prison staff, inmates and the general public, saying 'immediate action is necessary to prevent death and harm.'"

Judges gave state officials 45 days to come up with a plan for reducing the prison population; among their recommendations for doing so was lowering the number of nonviolent offenders who are incarcerated.

The judges said that "by changing parole practices and releasing some low-risk inmates to local custody, treatment programs or electronic monitoring, the prison population can be reduced 'without a meaningful adverse impact on public safety,'" the San Francisco Chronicle reports.

In an effort to reduce its crippling $26 billion budget gap, California had previously planned to reduce its prison population by 27,000, the New York Times reports. That decision was reversed after law enforcement and victims' rights groups raised objections.

"This is just the tip of the iceberg," said CBS News Chief Legal Analyst and Legal Editor Andrew Cohen. "There are other states which have big problems with overcrowding in prisons, problems exacerbated by the recession, which is forcing state legislators to cut the criminal justice budget even as they send more people off to prison. Attorney General Eric Holder just this past week noted that one in 100 Americans is now in jail."

The California decision, which is bound to spark fears about the implications of prisoners being released into the general population, will likely become a major issue in the state's upcoming governor's race.

One possible candidate, Attorney General Jerry Brown, said he would appeal the decision, as did Schwarzenegger.

Here's more background on the ruling from the New York Times:

The special three-judge panel described a chaotic system where prisoners were stacked in triple bunk beds in gymnasiums, hallways and day rooms; where single guards were often forced to monitor scores of inmates at a time; and where ill inmates died for lack of treatment.

"In these overcrowded conditions, inmate-on-inmate violence is almost impossible to prevent, infectious diseases spread more easily, and lockdowns are sometimes the only means by which to maintain control," the panel wrote. "In short, California's prisons are bursting at the seams and are impossible to manage."

As the Los Angeles Times notes, a legislative debate over prisons in the state is set for later this month.

"The governor and most legislative leaders back a plan that would reduce prison populations by as many as 37,000 over the next two years using a combination of early releases, changes in parole policies and shifting of some prisoners to county jails," the newspaper reports. "Debate on that plan will be contentious, with many Republicans opposed. But the judges' ruling means that defeating the plan would not only unravel a major piece of the budget agreement but also potentially cede decision-making over prison policies to the federal courts."