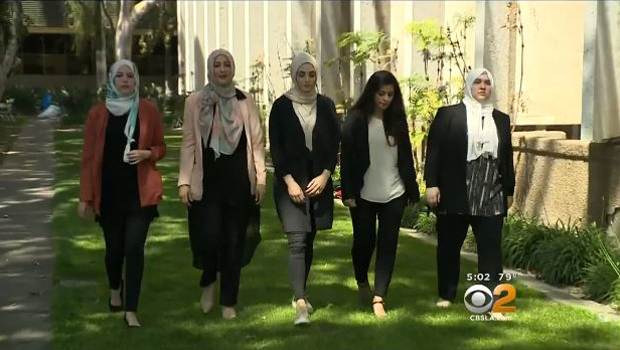 SANTA ANA, Calif. -- Seven Muslim women are suing a Southern California cafe, claiming they were kicked out because of their religion and were treated like animals, CBS Los Angeles reports.

One of the plaintiffs, Sara Farsakh, said: "I felt embarrassed, outraged and shocked by the discrimination my friends and I were subjected to."

The women said police officers escorted them out of Urth Caffé in Laguna Beach for violating the restaurant's 45-minute limit table time.

"I truly believe had I been sitting there with my friends that were not wearing headscarfs, we would not have been asked to leave," Farsakh said. She said other customers told her that they had been there longer than the plaintiffs, and they were not kicked out.

Farsakh posted on Facebook a video of the April 22 incident, which has gone viral with hundreds of thousands of views. She alleged there were at least 20 empty tables when officers escorted them out.

According to the civil rights lawsuit, there has been a string of racially charged incidents at Urth Caffé targeting Muslims - something police denied.

"We had gone out there a couple occasions for egg-throwings. It was reported by employees. We also had an employee report to us that their tires were slashed." said Capt. Jason Kravetz of the Laguna Beach Police Department. "At no time did we have any of the patrons ever call us to report anything that was racially motivated. All these incidents were reported by employees."

The founder of the coffee shop chain issued a statement on Facebook: "Urth Caffé categorically denies any and all claims of racial or religious discrimination against Sara Farsakh. It appears that Ms. Farsakh and her friends violated company policies. Urth Caffé neither condones nor tolerates discrimination of any kind."

The plaintiffs' attorney, Mohammad Tajsar, said, "Urth Caffé's expulsion of this group of women is a throwback to the days of 'Whites only' signs and colored water fountains, with Muslims now being the convenient targets of discrimination."

"Urth Caffe's attempt to whitewash its upscale clientele by using its seating policy as a justification to expel those who outwardly appear Muslim is both immoral and illegal and should have no place in Orange County's diverse community," he said.

"CAIR-LA is investigating the matter and is very concerned about the possible bias motive involved in this incident in the wake of recent events in which Muslims were kicked off a plane or refused service simply for allegedly being Muslim," said Hussam Ayloush, the organization's executive director.