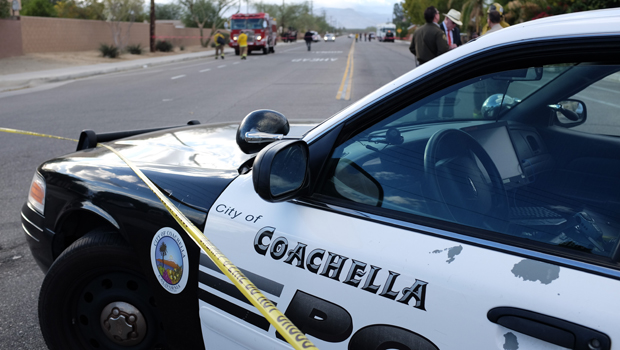 COACHELLA, Calif. -- A Southern California mosque was damaged in a fire that authorities said was intentionally set.

Riverside County sheriff's officials said that a person of interest was being questioned but declined to provide further details. No arrests were announced.

Flames were reported just after noon Friday at the Islamic Center of Palm Springs, according to the Riverside County Fire Department. The fire was contained to the small building's front lobby, and no one was injured.

By late Friday night, the Sheriff's Department released a statement calling the blaze "an intentional act" and saying it would use all available resources to investigate.

People at the mosque described hearing a "loud boom" and seeing flames, said Reymundo Nour, the mosque's acting imam, who was not on the site at the time. He said the mosque had been "firebombed."

Authorities provided no details on how the fire was set or whether the department has any suspects.

State fire investigators, the federal Bureau of Alcohol Tobacco, Firearms and Explosives and the FBI are assisting in the investigation.

The mosque is about 75 miles from San Bernardino, where last week a couple who federal officials say were inspired by Islamist extremists killed 14 people. Some Muslims in Southern California and beyond have worried about the potential for reprisals, while leaders of various faiths have called for tolerance.

In a statement released Friday evening, U.S. Rep. Raul Ruiz, whose district includes the area in which the mosque is located, called on authorities to investigate the blaze as a possible hate crime.

"Our faith in humanity will not be intimidated," he said. "And we stand together against any form (of) violence towards the innocent."

"We see this as a cowardly act of vandalism that we not tolerate in our community," Coachella Mayor Steven Hernandez said.

The mosque was hit by gunfire in November 2014 in what authorities investigated as a possible hate crime. No one was injured in the early morning incident. The case remains under investigation, and no arrests have been made.