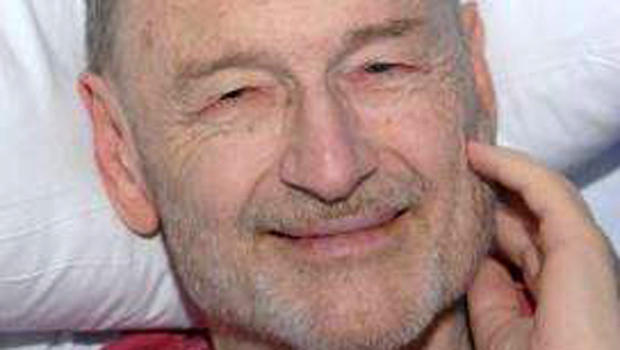 WHITTIER, Calif. -- A fire destroyed a house in Southern California in November 2014. The Whittier home is still red-tagged and boarded up, but it served as a clue to help solve a mystery in England, CBS Los Angeles reports.

On Nov. 7, 2015, an elderly man with an American accent was spotted in a bus station parking lot in the British city of Hereford.

He had no ID on him and was not able to tell police anything about himself because he had dementia, according to the BBC’s “Panorama.”

Police placed him in a nursing home and plastered his photo all over the news, asking the public to help identify him.

“We’ve taken his fingerprints,” Sgt. Sarah Bennett of West Mercia Police told “Panorama.” “That’s proved negative. We’ve contacted all the police forces in the U.K. We just need to find out more about him, where he’s from, who he is.”

The man was repeatedly asked his name. He replied once and said “Roger Curry,” according to investigative journalist Darragh MacIntyre. Police thought that might not have been his name and could have been someone from his past.

British investigators checked missing persons databases in the U.K. and abroad and contacted the Interpol plus Canadian and U.S. authorities to help identify the mystery man but to no avail.

Months passed, and police still had no idea who Roger Curry really was. But he was well taken care of at a nursing home, according to MacIntyre, who said he went there to see Curry.

The story drew a huge response from viewers and inspired a small army of social media detectives, who offered clues.

On the BBC’s Facebook page, a woman posted a 1958 yearbook picture of a student called Earl Roger Curry at Edmonds High School north of Seattle, Washington.

MacIntyre said he traveled there to talk to a woman named Helen, who looked after the web pages for the class of 1958. Helen and her husband, Jim, were in the same class.

The couple believed that young man in the yearbook picture was the same person as the mystery man in the British nursing home.

Over the next few weeks, MacIntyre said he traced Earl Roger Curry to the burned house in Whittier.

According to the British news network, authorities in Los Angeles County are trying to determine if Curry’s son, Kevin, flew his father to Britain in November 2015 and ditched him.

“He kept telling us that he couldn’t find a place to take him here. It didn’t seem right to me,” said neighbor Jerry Maiques.

He said he called police once when he spotted the elder Curry wandering in the yard confused and dehydrated. He said the mother was sleeping outside on an inflatable mattress and the son’s stories didn’t always add up.

No one answered the phone number CBS Los Angeles found for Kevin Curry, who has a criminal history.

The BBC reported he worked hard to avoid reporters for weeks.

“Did you dump your father in England, Kevin? Take your mask off and speak properly,” a reporter asked him on camera as he was walking away.

The mystery may have been solved. But the answers left people around the world stunned and dismayed about how a son may have abandoned his ill father overseas.

According to reports, the elder Curry was flown back to California and is now in a care facility in the L.A. area.