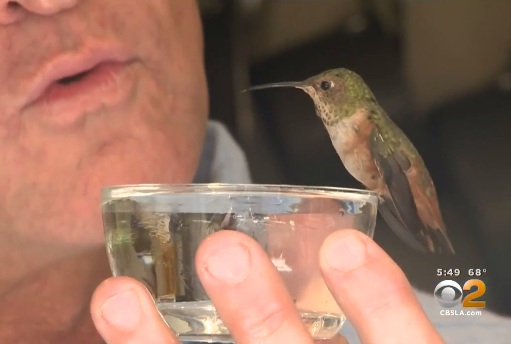 "He was dangerous," said Gernon of Rex. "He was an animal that had learned to live on the streets and to survive on his own hunting ability, I guess."

So, one can imagine the shock Gernon experienced when one afternoon just a month after Rex's adoption, the dog became the rescuer, saving a very tiny and sick hummingbird.

"And he suddenly stopped and he would not move," he recalls. "I mean it's tiny and it's dead as far as I'm concerned. It's covered in ants. It's got no feathers."

But that's not where the story ends.

Hummer, as she is called, is now living in Gernon's home a year later.

But it's been a long road.

In fact, Gernon had to nurse Hummer back to health (quite literally).

He feeds her a special formula every 15 minutes from sun up to sun down and even taught her how to fly using a hair dryer, CBS Los Angeles reports.

"You find yourself doing stuff you never thought in a million years you would do," he said.

And even Rex is willing to share his water bowl with Hummer.

"It was this little creature. This fragile creature that the whole world wanted to kill and he was trying to protect her so I thought I'd go the distance," said Gernon of Hummer, who has even let him steal a kiss.

It's been more than a year since Hummer arrived and Gernon knows eventually she will spread her wings.

"It's time for her to start mating and I keep leaving the doors and windows open thinking she'll leave," he said.

But while she's here, he says her little wings have made a big impact.

"I rescue this dog. He rescues the bird. The bird rescues all of us in a weird sense and it's just a miracle," Gernon said.