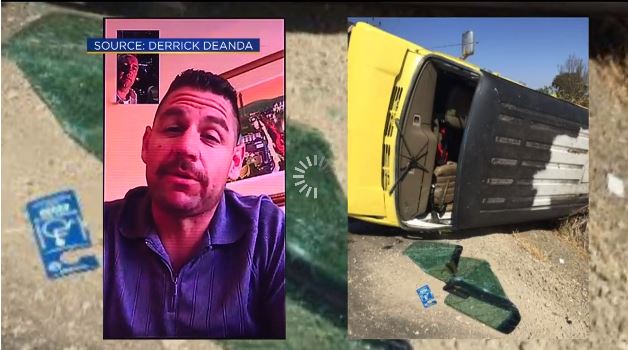 ELK GROVE -- A man who helped a family trapped a crash got a bill in the mail for his unselfish act.

Paramedics sent him the first-responder fee of nearly $150 after he says they only checked his pulse and gave him a bottle of water, reports CBS Sacramento.

A photo shows the aftermath of the scary rollover crash that trapped a man and his three children trapped inside.

Derrick Deanda jumped into action and recounted the heart-pounding moment.

"I pulled up right as it happened," he said. "There was a guy standing inside the van, because it was on its side, holding a 2 year-old infant."

Deanda broke the glass to free the family before paramedics arrived. Everyone was okay.

But weeks later Deanda got a bill in the mail from the Cosumnes Community Services District with a $143 first-responder fee.

"We're obligated to provide the same level of service, the same billing the same everything, for every patient we encounter," he said.

Deanda became a patient, he says, when a paramedic at the scene checked him out after breaking the van window to help save the family inside. Deanda had a small cut.

"This is truly a unique situation," he said. "In my 28 years, this is my first time I've run into a situation similar to this."

The district began implementing the fee two years ago in a move it says prevents fire station brownouts.

But in this case, McLaughlin says he'd like to see the fee waived.

But for now, this heroic act deserving of a medal has Deanda facing a bill.

Deanda plans to appeal and hopes the matter is resolved before it goes to collections.