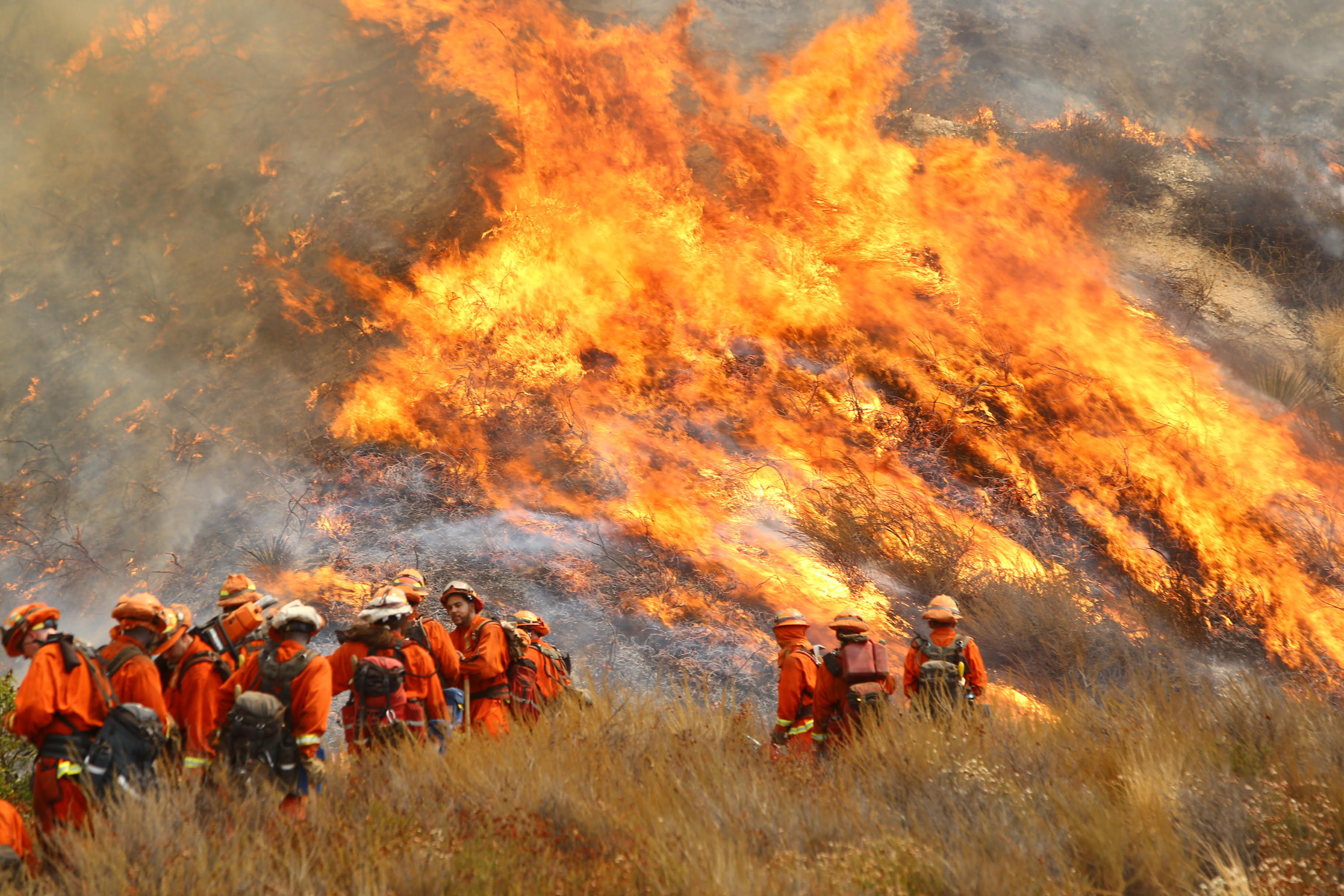 LOS ANGELES -- Smoke filled the sky and ash rained down across Los Angeles Sunday from a destructive wildfire that the mayor said was the largest in city history -- one of several blazes that sent thousands fleeing homes across the U.S. West during a blistering holiday weekend heat wave.

In Oregon, crews rescued about 140 hikers forced to spend the night in the woods after fire broke out along the popular Columbia River Gorge Trail.

Oregon State Police say the Eagle Creek Fire was caused by a person who possibly misused a firework. The suspect has been identified by police, CBS affiliate KOIN-TV reports.

Search and rescue crews airdropped supplies on Saturday as flames prevented the hikers' escape. Wildfires also burned in a 2,700-year-old grove of giant sequoia trees near Yosemite National Park, forced evacuations in Glacier National Park and drove people from homes in parts of the West struggling with blazing temperatures.

Meanwhile, Los Angeles Mayor Eric Garcetti declared a local emergency and Gov. Jerry Brown proclaimed a state of emergency in Los Angeles County due to the effects of the La Tuna Fire, CBS Los Angeles reports, as the wildfire destroyed three homes and threatened hillside neighborhoods. More than a thousand firefighters battled flames that chewed through more than 9 square miles of brush-covered mountains as authorities issued evacuation orders for homes in Los Angeles, Burbank and Glendale.

CBS Los Angeles writes that Brown's proclamation states that the fire by reason of its magnitude is beyond the control of services, personnel, equipment, and resources of any single local agency, and requires the combined forces of other organizations.

His proclamation allows the use of other state agencies to assist in the fire fight.

Late Sunday, officials announced that at least 25 percent of the La Tuna Fire was contained.

Temperatures were in the mid-to-high 90s but crews got a break from increased humidity and winds that calmed to less than 5 mph.

"That can change in a moment's notice and the winds can accelerate very quickly," Los Angeles Fire Capt. Ralph Terrazas told reporters Sunday. "There is a lot of fuel out there left to burn."

Officials were keeping an eye on thunderstorms in the mountains to the north, which could bring welcome rain but also the risk of flash floods and lightning.

Burbank resident George Grair was not in the evacuation zone but watched uneasily as flames blackened a hillside in the near distance.

"It's very difficult to feel safe. I've got kids in the house," he told KABC-TV. "I probably slept two hours all night."

The high at Los Angeles International Airport reached 97 degrees Fahrenheit on Sunday, topping the previous mark of 92, set in 1982. Records were also set in parts of Ventura and Santa Barbara counties, where the temperature hit 101 degrees.

San Francisco residents, meanwhile, stifled under a third day of a rare heat wave in the coastal city, although highs in the San Francisco Bay Area fell Sunday from all-time records set the previous two days.

"I went to Home Depot, Walgreens, Office Depot, Target. They were sold out!" downtown office worker Alganesh Ucbayonas said Sunday, detailing her unsuccessful search for a fan. "CVS!" she remembered.

On Sunday, Ucbayonas sat at her desk in a building lobby squarely between two fans, both scrounged from her office building's storage and trained straight at her face.

Fires burning up and down the Sierra Nevada and further to the northwest cast an eerie yellow and gray haze over much of California, and much of the state was under alerts because of poor air quality.

California authorities ordered evacuation for a third small town Sunday in one of the wildfires, a blaze that has burned 9-square-miles near Yosemite National Park.

Firefighters battling that blaze were making it a priority to safeguard a 2,700-year-old grove of giant sequoia and a pair of historic cabins at the grove, fire spokeswoman Anne Grandy said. Fire crews had wrapped the two 19th-century cabins and an outhouse in shiny, fire-resistant material to protect them from the flames that had entered the Nelder Grove, Grandy said.

The flames were consuming old brush and dead wood on the forest floor, but had not burned the giant sequoia, some of which top 20 stories in height, she said. The millennia-old trees already had "survived thousands of fires," she said.

California crews are also protecting homes from a fast-moving wildfire that forced evacuations in Riverside County.

In the Pacific Northwest, high temperatures and a lack of rain this summer have dried out vegetation that fed on winter snow and springtime rain. Officials warned of wildfire danger as hot, dry, smoky days were forecast across Oregon and Washington over the holiday weekend. In Washington state, Gov. Jay Inslee proclaimed a state of emergency across all counties as three major fires closed recreation areas and prompted evacuations.

Flames in Montana's Glacier National Park prompted officials to evacuate all residents, campers and tourists from one of the most popular areas of the park. The order Sunday affects the Lake McDonald area, the western side of the dizzying Going-to-the Sun Road and some of the most visited trails in the area. The Lake McDonald Lodge, built in 1913, closed last week due to heavy smoke in the area.

Forecasters said more heat could be expected when remnants of Tropical Storm Lidia move north from Mexico's Baja California during the weekend.