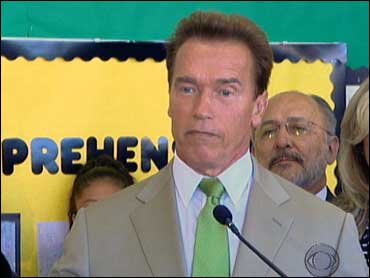 "It's been a 'do nothing' Congress, and John Doolittle has done very little to change that," says Charlie Brown, the Democratic candidate for Congress.

But Doolittle's home state has done a lot to change this, CBS News correspondent Sandra Hughes reports. Trend-setting California is at it again, leading a host of other states in tackling groundbreaking issues the federal government won't touch.

It began in 2004 when California voters thumbed their noses at federal restrictions on embryonic stem cell research and approved a $3 billion initiative. At universities around the state, brand new labs will soon be up and running.

"We're lucky to be in California, where the majority of the public supports this work," says Dr. Arnold Kriegstein of the University of California San Francisco Institute for Regeneration Medicine.

Global warming is another example. As Washington argues — and does little or nothing — California has passed the nation's most restrictive law on greenhouse gas emissions.

"This will lead to us leading the way for other states and for other nations," Gov. Arnold Schwarzenegger said at the bill signing.

And the list goes on — from prescription drug discounts to a new minimum wage that will rise to $8 an hour in 2008, Congress hasn't raised the $5.15 federal rate in a decade.

"We don't wait for anyone in the federal government to tell us which direction to go; we sit down in our capitol and we say this needs to be done," Schwarzenegger has said.

In state after state, governors are taking political credit for that can-do spirit.

"Someone had to do something about illegal immigration, and Sonny did," an ad for Georgia Gov. Sonny Perdue says.

Political scientist Jack Pitney says states will continue to drive the agenda on the big issues as long as Washington remains gridlocked.

"It's a great time to be a governor. Governors are the people who can get things done, and this is a time when there are a lot of domestic issues where the states can take the lead and where governors can make a name for themselves," says Pitney, a professor at Claremont McKenna College.

That's what California's governor says he's been doing, and he's about to coast comfortably to re-election. Incumbents hoping to extend their stays in Washington might do well to take notice.

Texas shooting survivor says her stepbrother, who died, wanted to be a police officer
Thanks for reading CBS NEWS.
Create your free account or log in
for more features.
View CBS News In
CBS News App Open
Chrome Safari Continue
Be the first to know
Get browser notifications for breaking news, live events, and exclusive reporting.