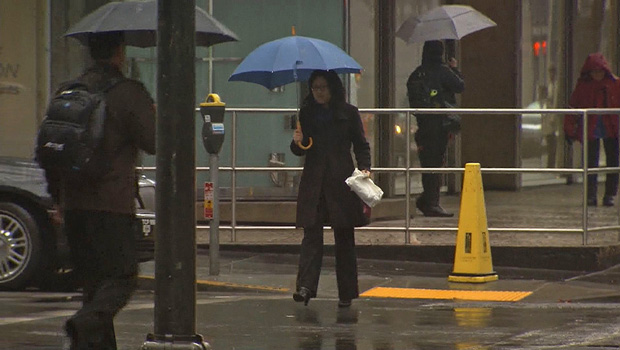 SAN FRANCISCO - For the first time in months people in San Francisco needed their umbrellas on Thursday.

The rain caused problems during the morning commute for drivers unaccustomed to wet roads.  At Pebble Beach, the annual pro-am golf tournament was suspended because of rain.

It was a small let-up in California's record drought.

"The drought's probably not over but it does look like a break," said meteorology professor John Monteverdi of San Francisco State University.

He finds more encouragement in a long-term forecast for next winter, the possible return of El Nino.

Models developed by the Scripps Institution of Oceanography predict a growing pool of warm water in the Pacific Ocean.  That creates the El Nino weather pattern that often means a wetter than normal California winter.

"There's no absolute way of saying 'Yes, we're going to have an El Nino,' and second that means a lot of precipitation on the West Coast," Monteverdi said.


The near term forecast is more certain: a lot of rain heading to northern California this weekend. That weather system is described as an atmospheric river.

"It looks like a narrow tongue of water that sort of resembles an ocean current as it comes to the coast," Monteverdi said.

"The government's Climate Prediction Center estimates there is a 49 per cent chance of El Nino developing later this year.  That's a higher probability than normal but far from certain.