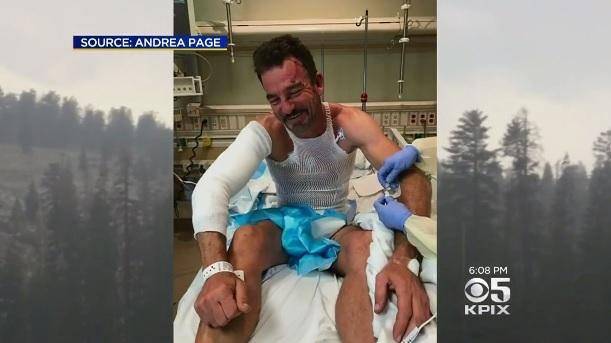 TULARE COUNTY -- A father and his two young children were struck by lightning in Tulare County and lived to tell about it. They're just grateful to be alive, CBS San Francisco reports.

It happened 2 weeks ago on a backpacking trip through the Sequoia National Forest.

Chris Lovera had just started recording on his video camera as he huddled under a tree during a storm with his kids, Aidan and Nadia.

For all three of them, the memory stops there because of a sudden bolt of lightning.

"After that point you know it was each of us waking up to a different scene," said Chris.

Aidan and Nadia awakened first to see their dad unconscious.

"I thought he was dead because I was just screaming at him and I couldn't see him breathing or moving," Aiden said.

"I got really scared," said Nadia.

They'd all been struck by lightning, but survived.

The bolt of electricity hit a tree nearby before hitting the tree they were under, and then striking them, according to what one witness described later.

"What he does say is that it looked like somebody blew us up," said Chris. "I mean he saw bodies go into the air, he couldn't tell how many."

It was enough to paralyze Chris for a few hours, leaving him with first and second degree burns as it wrapped around his body, down his back, to his feet.

A rescue helicopter flew them out.

Their burns were healing, but Aiden and his dad were still suffering from hearing loss. Of the three, Chris suffered the worst of the injuries.

"Both of them saw me in this state where they thought I was gone," said Chris.

He said he will be forever grateful to the off-duty firefighter and others who saw what happened and saved him and his family.

According to the National Weather Service, the chances of being struck by lightning are 1 in 13,500.

Warning: Some images in the video below are graphic.