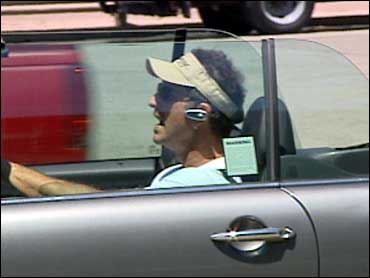 Los Angeles event planner Natalie Chambers is on the road - and on the phone - a lot, CBS News correspondent Bill Whitaker reports.

"Every time I'm in the car, I'm pretty much on my phone," she said.

Just hours before the deadline, she said: "I'm going to the Verizon store to get a hands-free set."

"I think they're funny looking," Chambers said. "I don't want to."

Until today, drivers holding phones to their heads were, well, so L.A. You'd see them on the streets, on the screen, and in the tabloids.

Today, rich and famous or not, you got a $20 ticket for driving while holding a phone.

Lawmakers say it'll make the roads safer. But reputable researchers say it's not holding the phone, but holding a conversation by phone that is the greatest distraction.

"Well, it's really easy," to text and drive, Chambers said. "I have the full keypad, so I just set up here and I text, and I could still see the road, so it works out perfect."

Hand-held phones or not, L.A. Times automotive writer Dan Neil spoofs, Angelenos can still be a menace behind the wheel.

As for Chambers, she says, "actually [it's] not that bad. It's pretty convenient, but it's a little weird to have this thing in my ear."

A little weird ... and now, so California.