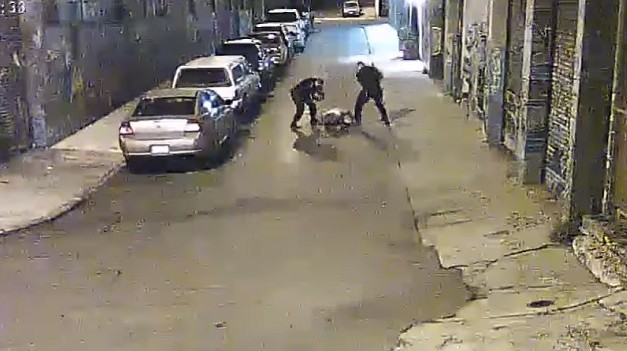 SAN FRANCISCO -- Two Northern California sheriff's deputies were charged with felonies Tuesday in the beating of a suspected car thief in an incident captured on surveillance video.

Two residents' surveillance cameras captured deputies continuing to beat the suspect with steel batons as he lay on the ground, crying out in pain. In addition, Gascon said one of the deputies' body-worn cameras appears to have accidentally turned on.

"I'm sorry," Stanislav Petrov could be heard screaming on one of the videos. "Help me."

Petrov, 29, was beaten with metal batons by the two deputies on a San Francisco street on Nov. 12 at the end of a car chase that began in unincorporated San Leandro, CBS San Francisco station KPIX reported.

The chase started in Castro Valley, continuing down I-580 and winding through city streets in Oakland before the Petrov headed to San Francisco on the Bay Bridge. Santamaria and Wieber were two of the Alameda County Sheriff's Office deputies who pursued Petrov over the bridge.

Once in San Francisco, Petrov drove through city streets at high speed, driving through red lights and driving the wrong way on one-way streets until he ran out of gas and crashed the stolen car at the corner of Stevenson Street and 14th Street.

According to court documents, Petrov abandoned the stolen car and ran from two deputies who pursued him down Stevenson Street and then Clinton Park. Santamaria and Wieber left their vehicle and continued their pursuit on foot. While on Clinton Park, Petrov slowed down and began to put his hands in the air just before being tackled by Wieber.

The two deputies then started to strike Petrov with their retractable service batons.

The investigation into the beating heated up after surveillance videos of the incident surfaced in mid-November.

Two separate videos capture Deputies Santamaria and Wieber beating Petrov with their batons over the course of 40 seconds, striking him at least 30 times.

Gascón noted during the press conference Tuesday that in addition to the surveillance video clip provided to the public defender's office, one of the deputies involved in the beating accidentally triggered his body camera, inadvertently filming a portion of the incident. That video has not yet been released to the media.

The deputies stopped striking Petrov when other peace officers from multiple law enforcement agencies arrived and the suspect was arrested.

"Policing that violates our constitutional rights damages the reputation of every person that wears the uniform, and it damages the public's perception of those that are sworn to serve." said Gascón in a press release. "When officers take the law into their own hands, they undermine the moral authority of the entire criminal justice system."

The two deputies are expected to surrender by the end of the day Wednesday, with bail set at $140,000 each.

Court documents outlined numerous injuries that Petrov sustained as a result of the assault, including a concussion, multiple broken bones in both hands, a mild traumatic brain injury, and deep lacerations to his head.

Petrov's lawyers, who filed an administrative claim against Alameda County on his behalf last month, say he was hospitalized for 12 days, underwent extensive surgery and suffered permanent damage to his hands.

Petrov has been in federal custody since the FBI arrested him and Milagro Moraga, 24, at a house in the Visitacion Valley District of San Francisco on April 1.

The federal criminal complaint, issued under seal on April 1 and unsealed at a hearing Friday by U.S. Magistrate Sallie Kim, charges Petrov with three gun offenses and two drug counts.

In an affidavit filed with the complaint, FBI Agent Jenny Feng alleged that FBI agents and San Francisco police officers searching the house at 23 Teddy Avenue on March 8 found a Ruger pistol, several small bags containing a total of 5 ounces of methamphetamine and drug paraphernalia in a room in which Petrov and Moraga were found sleeping.

That search was carried out in connection with "a cyber crime investigation unrelated to Petrov and Moraga," Feng wrote.

Petrov and Moraga were briefly detained but not arrested on March 8, and Petrov said he had been "living in and out of the house for over two months," according to Feng.

Feng wrote that Petrov was previously convicted of five felonies and three misdemeanors in state courts.

The felonies were two counts of transporting methamphetamine for sale in San Francisco in 2006 and 2010; two counts of recklessly evading peace officers in San Mateo in 2007; and possessing narcotics for sale in Palo Alto in 2014, for which he is currently on probation.