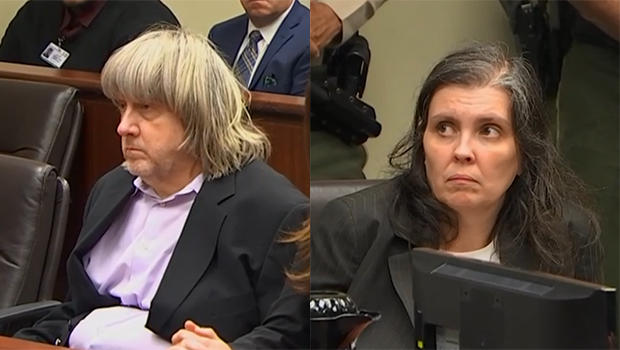 RIVERSIDE COUNTY, Calif. -- California couple David Allen Turpin, 56, and Louise Anna Turpin, 49, have been charged with committing years of torture and abuse against the 13 malnourished siblings they allegedly kept captive in their Riverside County home.

Both appeared in court Thursday afternoon and entered not guilty pleas to all counts -- 12 counts of torture, 7 counts of abuse of a dependent adult, six counts of child abuse or neglect and 12 counts of false imprisonment, for alleged crimes ranging from 2010 to the present. David Turpin is also charged with one count of lewd act on a child.

If convicted as charged, they face up to 94 years to life in prison, according to the Riverside County District Attorney's Office.

The Turpins sat at the defense table during the arraignment, dressed in dark suits and shackled. Both spoke only to say they understood their right to a speedy preliminary hearing. Neither showed emotion.

Their next court date was set for Feb. 23.

Prosecutors revealed shocking details in the case as they announced the charges Thursday. They said the siblings, who range in age from 2 to 29, were allegedly tied with ropes and chains as punishment and were so severely malnourished that they appeared to be much younger than their ages.  A 29-year-old woman weighs 82 pounds, and a 12-year-old weighs as much as an average 7-year-old, a prosecutor said.

The 17-year-old girl who officials said escaped over the weekend spent more than two years working on the plan with her siblings, a prosecutor said. When the teen fled the house on Sunday, one of her 12 siblings accompanied her but became frightened and went back into the house in Perris, California, Riverside County District Attorney Mike Hestrin said at a press conference earlier Thursday.

"As a prosecutor, there are cases that stick with you, that will haunt you," Hestrin said. "Sometimes in this business, we're faced with looking at human depravity -- and that's what we're looking at here."

The couple would also frequently beat and strangle the siblings as punishment, he said.

"One of the reasons for the punishments were if the children were found to wash their hands above the wrist area, they were accused of playing in the water, and they would be chained up," Hestrin said.

None of the siblings were allowed to shower more than once a year, he said.

None of the siblings had seen a doctor in more than four years, and none had ever seen a dentist, Hestrin said. When authorities asked the 17-year-old whether there were any pills or medication inside the house, she didn't know what those were.

Even though the house was listed as a private school, the siblings didn't know basic details about modern society, Hestrin said. Many didn't know what a police officer was.

However, at least one of the older siblings attended classes at a local college. Louise Turpin would accompany him, wait outside the classroom and then take him home, Hestrin said.

The couple would apparently buy food for themselves and then let the siblings look at it but not eat it, he said.

"They would buy food, including pies, apple pies, pumpkin pies, leave it on the counter, let the children look at it but not eat the food," Hestrin said.

Authorities were examining hundreds of journals found at the house, he said. Writing was basically the only activity available to the siblings. They weren't allowed to have toys, but many toys were found inside the house still in their original packaging.

Bail has been set at $12 million each, reported CBS News' David Begnaud.