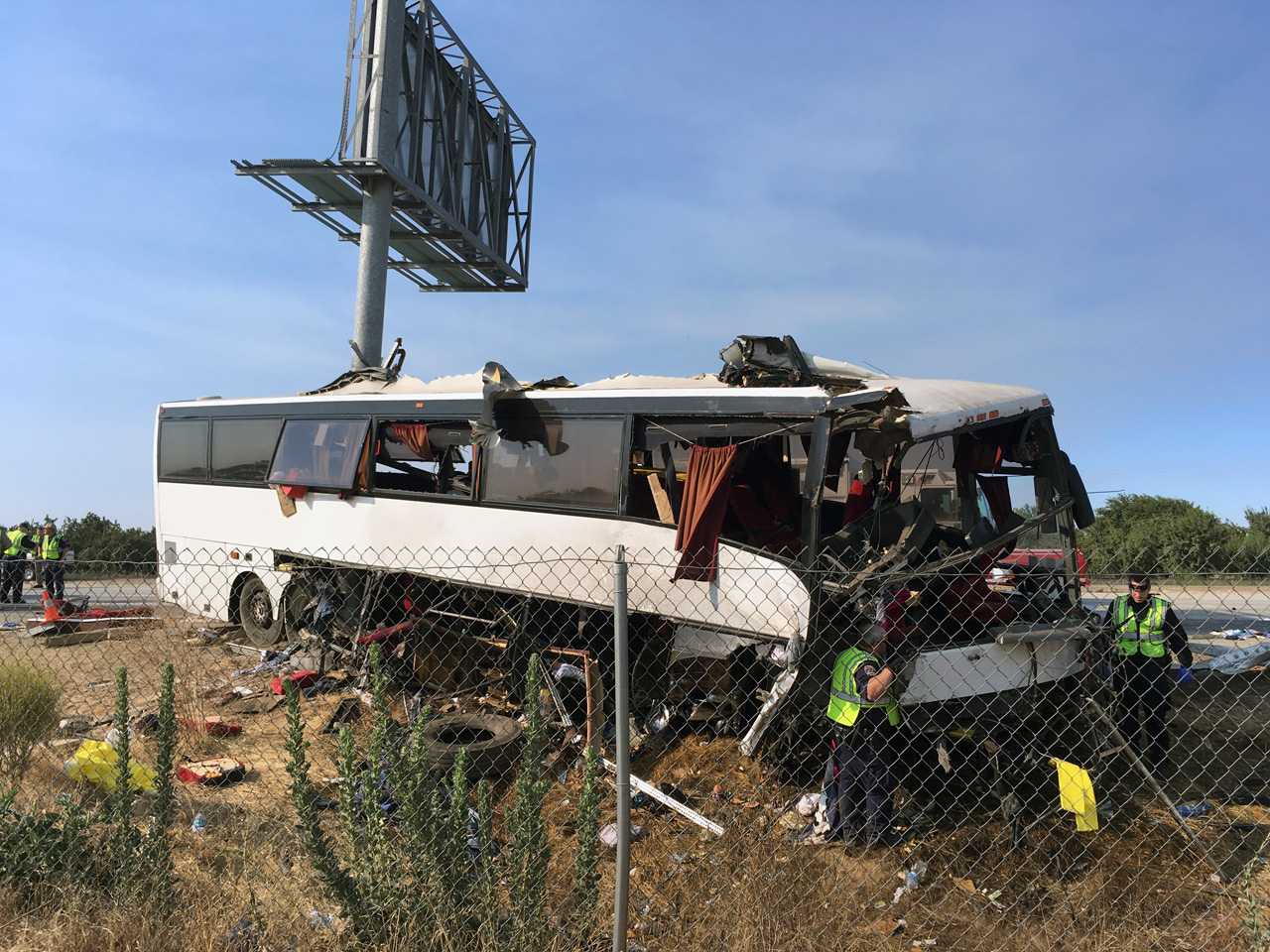 ATWATER, Calif. - Leonardo Sanchez was sleeping peacefully on a bus carrying him to Oregon to pick blueberries when he was suddenly thrown face-first into the back of the seat in front of him, awakening him to a horrific scene of chaos and death.

The bus carrying Sanchez and about 30 others on a pre-dawn journey through California's agriculturally rich San Joaquin Valley had somehow plowed head-on into a highway pole that nearly sliced it in half. Five people died and at least 18 were hurt.

"There was lots of screaming and crying," Sanchez told The Associated Press hours after Tuesday's crash. He said only about eight people, including himself, escaped the bus largely unscathed.

"The rest of them, the police and ambulances arrived to get them out. And the dead," he added solemnly in Spanish.

Merced County Sheriff Vern Warnke said rescuers pulled "bags of body parts" from the bus along with survivors, adding that some people suffered severed limbs. Other victims were thrown from the vehicle and landed in a ditch.

Of the 18 injured, three were initially in critical condition but they have since been upgraded to serious, officials said. Three more are in fair condition and the rest have injuries ranging from minor to moderate.

The bus, operated by Autobuses Coordinados USA, was heading to Washington state on State Route 99. It was approaching Livingston, a farming and industrial town of about 13,000, where it had been scheduled to change drivers.

Apparently running late for its 1:30 a.m. driver switch, the bus veered off the highway shortly before 3:30 a.m.

A passenger headed from Mexico to her home in Pasco, Washington, said moments before the crash it appeared the driver was trying to pass another vehicle that he apparently expected to yield, but it wouldn't let him merge.

"It kind of ran him off the road," Nakia Coleman told Washington's Tri-City Herald newspaper.

He said investigators have been unable to interview the 57-year-old driver, Mario David Vasquez of the Los Angeles area, because of the extent of his injuries.

The accident sliced the bus from front to back, with the vehicle coming to a stop when its first rear axle hit the pole. That was when Sanchez was violently tossed awake to discover a scene of chaos and carnage filled with the screams of trapped and injured people.

"We couldn't pull people out because there was shattered glass everywhere, seats destroyed," he said.

Lesser injured like himself climbed out on their own, fearful the bus might catch fire. The 55-year-old farmworker said he was left with pain in his stomach and a bruised jaw and mouth.

"It was too much. It was a very ugly accident. Thanks to God that I got out of there alive," he said.

The bus was traveling north up State Route 99, which cuts through the center of California farm country, and was only about a couple miles from its next stop when the crash occurred.

The still-intact sign it hit stuck out from the roof of the crumpled bus hours after the crash as crews prepared to move the vehicle. Wreckage and debris including seat cushions, drink containers, pillows and a blanket were scattered in lanes and on the highway's shoulder.

Some highway signs, like those for the speed limit, have support poles designed with points that break away during a crash. But the poles supporting the much larger overhead signs like the one the bus hit are designed to "stay put," said Vanessa Wiseman, a spokeswoman for the state Department of Transportation.

Calls to various telephone listings for the bus company went unanswered. Its counter at a Los Angeles depot was open, but nobody was present when an Associated Press reporter arrived midmorning. A sign in Spanish advertised daily 7:30 p.m. departures to destinations up the West Coast to Washington.

CBS Sacramento reports the bus that crashed had an issue with its brake warning system as recently as April.

There were no crashes in the Fresno-based bus company's record, but in the past two years CBS Sacramento found Autobuses Coordinados USA had more than 50 violations tied to its drivers and buses.

In nearly one-third of those inspections, the feds ordered vehicles out of service.

The same bus in Tuesday's crash that killed five people and injured 16 had problems in an inspection on April 28. According to federal records, inspectors found violations for having "no or a defective brake warning device." That device warns the driver if there's a problem with the brakes. Investigators say it was "equipped with prohibited non-automatically folding seats in the aisle."

In February 2015, a driver of the same bus was caught "driving a [commercial motor vehicle] while [commercial driver's license] is suspended." It's unknown if that is the same driver that was in Tuesday's crash.