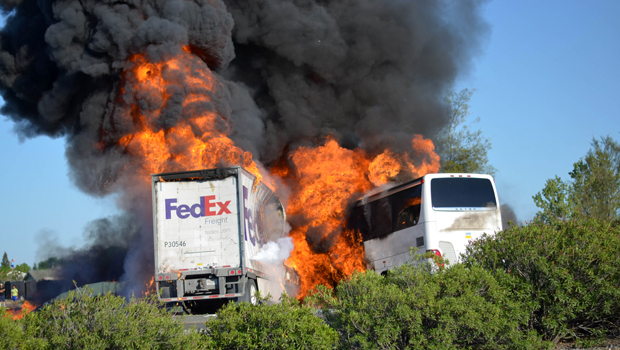 National Transportation Safety Board member Mark Rosekind said that the truck left no tire marks as it careened across a median and slammed into the bus taking the students to a college tour in Northern California.

Investigators also interviewed a witness who said the truck was already on fire before it crossed the median.

"I looked over and saw the FedEx truck coming straight for me, and he was in flames already," Bonnie Duran told CBS station KOVR-TV in Sacramento. Duran was driving with her husband, Joe, north on Interstate 5, the same direction the bus was heading in.

The couple, from the Seattle area, was not seriously injured. After seeing the truck crash into the bus, they was uncertain if there would be survivors. "It was so scary. We were wondering if anyone was gonna get out of there alive," said Bonnie.

The truck and bus exploded into towering flames after Thursday's crash, making it difficult for investigators to determine whether a fire started in the truck. But Rosekind says investigators plan to look at a blood test and other physical evidence to make that determination.

The charter bus was carrying students to a college campus tour in California's redwood county. Bodies recovered from the bus were charred beyond recognition.

Five students from the Los Angeles area, three chaperones and the truck and bus drivers died in the crash. Dozens were injured, and several remained hospitalized Saturday, including at least one in critical condition.

As part of what's expected to be a lengthy and broad investigation, federal transportation authorities are examining whether fire safety measures they previously recommended for motor coaches could have allowed more of the 48 bus occupants to escape unharmed.

In a briefing at the start of the investigation, the Rosekind said the NTSB will not only look into the cause of the crash, but what regulators can do to stop any similar ones from happening in the future. Fire safety is one of six areas the NTSB plans to investigate, partly because it has been longstanding concern of the agency.

After a 2005 bus fire killed 23 nursing home residents escaping Hurricane Rita in Texas, the NTSB called for safety standards that could make buses less vulnerable to fire, including improved protection of fuel tanks. More recently, the NTSB says buses must have sophisticated suppression systems to control fires, much as high-rise buildings have sprinkler systems.

"Fire suppression holds the greatest potential for saving lives, reducing costs and minimizing damage," according to a recent NTSB list of its safety priorities for all modes of transportation. Existing fire standards dating to the 1970s apply to small fire sources such as lit cigarettes, but they do not apply to large fires that can start outside the bus.

The NTSB, which investigates accidents and their causes, has no authority to require safety changes it recommends.

But a bill passed by Congress in June 2012 directed the Department of Transportation to conduct research and tests on ways to prevent fires or mitigate the effects, among other safety issues.

The law suggests the department issue new standards in those areas within three years if the secretary of transportation decides they are "reasonable, practicable and appropriate." Former National Highway Traffic Safety Administration Administrator Joan Claybrook told the Associated Press that the bus industry fought with safety advocates "like cats and dogs" to prevent "hard deadlines" for the new regulations.

So far, the government has not proposed any new standards related to passenger evacuation in event of a fire or other fire-related issues, according to Advocates for Highway and Auto Safety, which lobbied Congress for tougher motor-coach safety standards.

"The legislation includes many mandates to the Transportation Department on many aspects of safety, some of them easy, others not so easy," said Jacqueline Gillan, president of the safety advocacy group. "Nonetheless, they all need to be done, and there have been no regulations even on the easy ones."

The National Highway Traffic Safety Administration, which is part of the Transportation Department, recently initiated a two-year contract to develop and evaluate test procedures to assess fire detection, suppression and flammability of exterior materials for motor coaches, the safety advocacy group said. The research project, headed by the Southwest Research Institute, is to focus on engine and wheel-well fires.

A 2009 study commissioned by the Federal Motor Carrier Safety Administration estimated that 160 bus fires occurred each year from such non-collision related causes and 95 percent did not result in injury or death.

The 44 Southern California high school students on the bus in Thursday's crash, many hoping to become the first in their families to attend college, were on a free trip arranged by Humboldt State University.

The victims included a recently engaged couple from Los Angeles, Michael Myvett and Mattison Haywood, and college counselor Arthur Arzola, all of whom were chaperoning the trip. Among the students was Marisa Serrato, an identical twin from Riverside whose sister was on another bus that arrived safely at Humboldt.

Silverado Stages, the San Luis Obispo, Calif.-based company that owns the charter bus involved in the crash, has a strong safety record, and it has said it is fully cooperating with the investigation. It is unclear what sort of fire-safety equipment the bus in Thursday's crash had, and the company couldn't be reached for comment Saturday.

As part of its investigation, the NTSB said it is trying to determine whether the FedEx driver might have fallen asleep or suffered a health problem and whether there were mechanical issues with the truck. The agency also is evaluating whether there should have been a barrier on the median to help prevent head-on collisions. Barriers are required when medians are less than 50 feet wide; this one was 60.