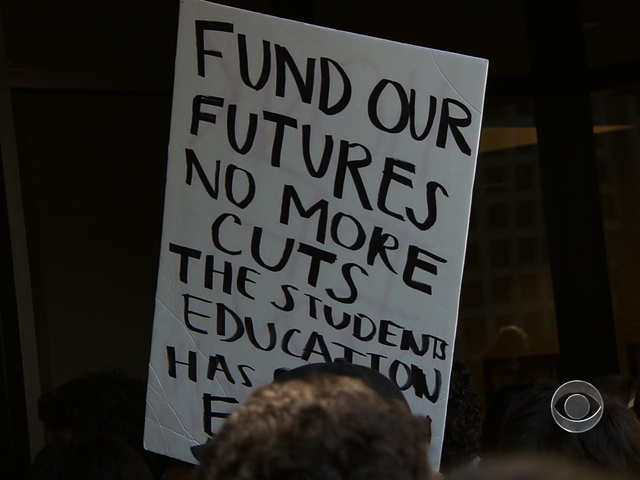 With the United States facing tough competition from abroad, education is more important than ever. But that struggling economy is forcing states to make budget cuts. As CBS news correspondent Ben Tracy explains, California announced about a billion dollars in cuts to schools and social services.

"It brings me to tears. It's sad," said 14-year-old Gabriela Carrilo, who attends a special high school for those wanting to work in health care. She lives an hour-and-a-half away. State funding for all bus transportation is now gone. Carrilo may have to change schools.

" I just believe it's very unfair and the budget cuts aren't right," she said.

Speaking from a podium at the state Capitol, California Gov. Jerry Brown said: "We don't want to dig ourselves into a hole that becomes virtually impossible to climb out of."

He said a stronger economy has helped increase tax revenue, but the state's current budget is still short $2.2 billion. The automatic cuts will now slash budgets for schools, in-home support for seniors and the disabled, libraries and prisons.

"This is not the way we want to run California," he said, "but we have to live within our means."

This year's budget had already cut $16 billion. Funding for public universities was slashed 23 percent, prompting protests of tuition increases this fall. The University of California system will now lose another $100 million.

State Republicans won't budge on raising taxes, so Gov. Brown wants Californians to vote next November on whether to raise taxes for people making more than $250,000.

"You either cut or you tax. There is no third way, there is no alternative," he said.

Governor Brown warned of even more dramatic cuts come January because California is still facing a $13 billion long-term budget shortfall. Republicans in California say Brown is using fear of these cuts to gin up support for his tax plan.