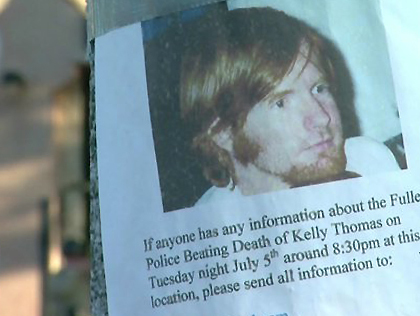 Ramos, 37, made bail with the help of family and friends, in addition to posting some property towards the bail amount, attorney John Barnett said. In California, defendants can often post 10 percent of bail, called a premium, to secure their release.

Ramos, a 10-year-veteran with the Fullerton Police Department, pleaded not guilty Monday before a judged rejected a request to lower his $1 million bail.

Thomas, a schizophrenic homeless man, died after a confrontation with six police officers who were responding to reports of car burglaries.

Prosecutors have said Thomas was shocked four times with a Taser, kneed in the head, punched in the ribs and bashed eight times with the butt of a stun gun.

The coroner concluded the cause of death was mechanical compression of the thorax, which made it impossible for Thomas to breathe normally and deprived his brain of oxygen.

Officer Jay Cicinelli, 39, was also charged with involuntary manslaughter and use of excessive force. He is free on $25,000 bail.

Ramos and Cicinelli, who have been on paid leave, will lose their pay starting Oct. 8 pending the outcome of the case, acting police Chief Kevin Hamiton said.

Four other officers, who were not charged, will remain on paid administrative leave while the FBI completes an investigation and the Fullerton Police Department concludes an internal inquiry.

Ramos was told to return to court Nov. 4 for a pre-trial hearing.

The Fullerton police union issued a statement Thursday saying it did not contribute funds or assist in raising the bail money.