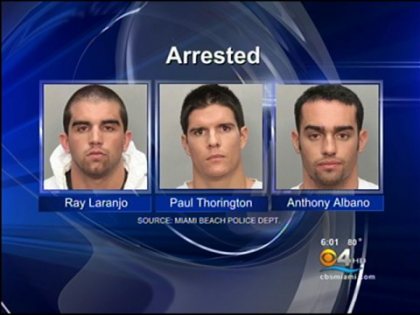 (CBS/WFOR) MIAMI BEACH - Three Southern California men have been charged with raping a woman at the posh Fontainebleau Hotel in Miami Beach.

Ray Laranjo, 23, Paul Thorington, 22, and Anthony Albano, 23, all from the South Bay area of Los Angeles, are accused of taking turns sexually assaulting the woman in their hotel room, according to CBS affiliate WFOR.

According to police, the men met the woman at a pool party held at the Shelborne Hotel a few blocks from the Fontainebleau on Wednesday afternoon, March 23. The victim agreed to go to the room where the men were staying so she could drop off her purse, reports CBS affiliate WFOR.

There, the victim told police, the three men held her down on the bed while each having sex with her.

Police add that while the victim was trying to defend herself, she bit one of her attackers.