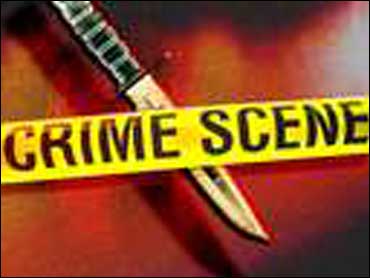 (CBS) CORONA, Calif. - Police arrested a man suspected of stabbing his ex-girlfriend and their two children after he was seen walking along a freeway wielding a knife and covered in blood, reports the  Los Angeles Times.

The 23-year-old suspect, whose name has not been released, was in stable condition after being shot by police, according to detective John Samano of the Corona Police Department.

Investigators said the man is suspected in killing his 25-year-old ex-girlfriend, their 4-year-old son and their 1-year-old daughter inside a home on the west side of Riverside. All three victims were pronounced dead after being taken to a hospital.

Samano said that police received a report Thursday morning of a man holding a knife at the interchange of the 91 and 15 freeways. The suspect had climbed out of his car and was walking alongside the westbound lanes of the 91 Freeway, heading toward the Main Street exit.

Samano said the man began running when police arrived at the scene. After a brief foot chase he was shot by an officer and taken to Riverside Community Hospital.

Police recovered the knife at the scene, Samano said.

The victims' names have not yet been released, pending notification of their next of kin.