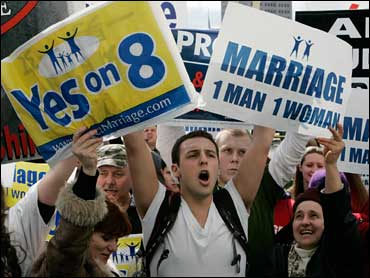 As thousands demonstrated outside Thursday, California Supreme Court justices weighed whether voters' decision to ban same-sex marriage was a denial of fundamental rights or within what one justice called the people's "very broad powers" to amend the state constitution.

Gay rights advocates are urging the court to overturn the ban, approved in November as Proposition 8, on the grounds it was put before voters improperly, or at least prematurely. Under state law, the Legislature must approve significant constitutional changes before they can go on the ballot.

Proposition 8's sponsors, represented in court by former Pepperdine law school dean and Whitewater prosecutor Kenneth Starr, argue that the ballot initiative was approved correctly. They argued it would be a miscarriage of justice for the court to overturn the results of a fair election.

The ballot initiative, which passed with 52 percent of the vote, changed the California Constitution to trump last year's 4-3 Supreme Court decision that legalized gay marriage. The court found that denying same-sex couples the right to wed was an unconstitutional civil rights violation.

California voters first enacted a ban on gay marriage in 2000.

Minutes into the proceedings, the justices peppered lawyer Shannon Minter, arguing for same-sex couples, with tough questions over how the 14 words of Proposition 8 represent a revision of the state's constitution or a denial of fundamental rights.

Chief Justice Ron George asked what rights were lost other than being able to label their union as a marriage.

"Relegating same-sex couples to domestic partnership does not provide them with everything but a word," Minter said. "It puts those couples in a second-class status."

The Supreme Court is hearing arguments on three points: Is Proposition 8 invalid because it constitutes a revision of, rather than an amendment to, the California Constitution? Does it violate the separation of powers doctrine under the California Constitution? And, if it's constitutional, does it affect the 18,000 marriages of same-sex couples performed in the 4½ months before it passed?

Justice Joyce Kennard said the court was being asked to decide between two rights - the right of the people to change the constitution and the right to marry.

"And what I'm picking up from the oral argument in this case is this court should willy-nilly disregard the will of the people," she said.

Kennard's vote could be key in the court's future ruling because she was part of the narrow 4-3 majority that approved gay marriage last year, reports CBS station KPIX-TV in San Francisco.

"Life is, at least in my view, a fundamental right," Kennard said.

He also argued that California voters have an "inalienable right" to amend the constitution and that taking away rights through the initiative process is not a revision that alters the structure of government.

"There must be far-reaching change in the basic structure of government," said Starr, adding that there's a long line of previous Supreme Court decisions supporting his position.

Justice Kathryn Werdegar countered that nothing in those decisions stated that something "must" alter the structure of government to qualify as a "revision."

Starr said he and Werdegar would have to "agree to disagree" and that "rights are important but they don't go to structure."

At least three justices appeared skeptical that proposition could be applied retroactively.

George suggested the validity of the earlier marriages was purposely omitted from Proposition 8 as a campaign strategy to increase the likelihood of its passage.

Starr said the intent of Proposition 8 was to invalidate those marriages. The proposition was drafted before the high court legalized gay marriage on May 15, he said.

Justice Carlos Moreno noted Proposition 8 states that marriage "is" limited to a man and a woman.

"I know people can argue over what 'is' means," Moreno said.

The Supreme Court's seven justices have 90 days to issue a ruling.

Outside, gay marriage supporters and opponents held signs lobbying the justices to take their side.

Dana Tibbits, who drove 400 miles from her home in Ventura County to join the crowd of Proposition 8 supporters, said she there for the "approximately 7 million voters whose voices need to be heard."

Gay marriage supporter Chris Bospuz, 23, said after the hearing: "I was pretty disheartened at the beginning, but I'm optimistic," he said. "It's a civil right and they can't just strip away civil rights."

Nearby, opponents of the unions held yellow signs left over from last year's campaign that said "Yes on 8." Others said, "A moral wrong cannot be a civil right."

Ted Stodolka, of San Francisco, said he was "completely in support of gay marriage" and surveyed the Proposition 8 supporters with both amusement and irritation.

"I'm getting a bit angry watching all of it," he said. "I guess their intolerance for us is changing into me being a bit intolerant of them," he said, smiling. "I'm trying to control that."

"When you try to engage, they either won't or can't articulate why they feel Proposition 8 should stand," Stodolka said.

Police officers stood watch, and while emotions ran high, the demonstration was peaceful.

Fewer than two dozen people who waited in line early Thursday were able to get seats in the courtroom for the three-hour hearing. Gay rights groups also rented out a nearby auditorium and a big screen television for the outdoor plaza.

Stuart Milk, the nephew of murdered gay supervisor Harvey Milk, said the court needs to rule that a narrow majority of voters cannot nullify the rights of a minority group, reports KPIX.

"This is more than an LGBTQ issue, it's an issue of really embracing the full diversity that makes our nation stronger, our city stronger, our state stronger," said Milk.

Kenny Vick of San Francisco, a former U.S. Navy petty officer second class, held up a sign stating he had fought for the freedoms of America, and said those freedoms should include gay marriage.

Vick said he has been with his partner, Richard Griffin, for 22 years and camped out overnight to get married in San Francisco in 2004, only to have the marriage annulled months later.

Vick and Griffin married again on Aug. 22 after the Supreme Court decided to allow gays and lesbians to marry, and although he could have a second marriage invalidated depending on the court's decision, he seemed pleased with how the hearing was going.

"We remain hopefully optimistic," Vick said. "I think that the line of questioning has been very, very good."

Todd Barrett said he and his partner Joe Witmore, who were married during the 4½-month window last year when same-sex couples could wed in California, brought their 5-year-old daughter to show that Proposition 8's passage affected families.

"I don't know how I would explain to her that Daddy and Pappa aren't married anymore," Barrett said.

The coalition of religious and conservative groups that sponsored the ballot initiative organized a statewide day of prayer on Sunday to rally support for upholding the measure and encouraged supporters to peacefully join same-sex marriage advocates outside the Supreme Court on Thursday.

"Our only purpose is to remind the media, Californians and Americans everywhere that support for traditional marriage is the majority position in the state," Ron Prentice, chairman of the ProtectMarriage coalition, said in a statement. "We won the Prop 8 election. The Constitution has been amended. The will of the people should now prevail."

Don Grundmann with the American Warrior Ministry in San Leandro said it is the pro-gay marriage groups who are violating his rights, reports KPIX.

"They're attempting to take away the right of the citizens to vote on what they wish, and what they choose for their state," said Grundman.

Attorney General Jerry Brown has taken the unusual step of refusing to defend the gay marriage ban in court. His office argues that because the court has already recognized marriage as a fundamental right and gays as a minority group deserving of judicial protection, outlawing same-sex marriage is a constitutional breach.

Both Brown and the parties behind the lawsuits also claim that the ballot measure abrogates the court's role as the ultimate guardian of civil rights and if allowed to stand would leave other groups vulnerable to having their liberties curtailed.