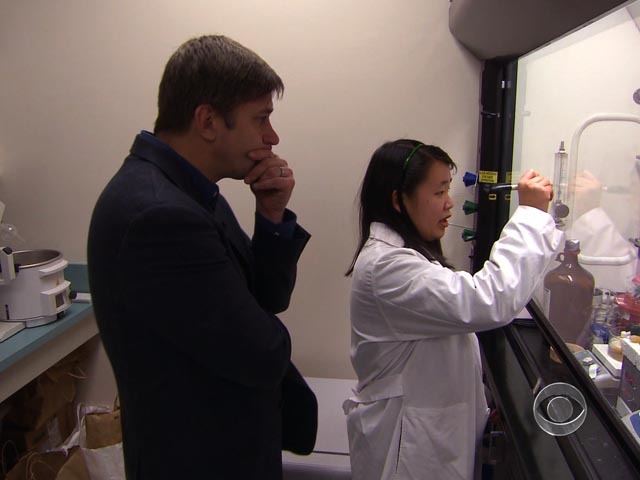 If you ever worry about the future of America, there is no need: it is in good hands. A high school student named Angela is proof of that. We think you'll agree she is nothing short of amazing. CBS News correspondent Steve Hartman met her on the road.

Born to Chinese immigrants, 17-year-old Angela Zhang of Cupertino, California is a typical American teenager. She's really into shoes and is just learning how to drive.

But there is one thing that separates her from every other student at Monta Vista High School, something she first shared with her chemistry teacher, Kavita Gupta.

It's a research paper Angela wrote in her spare time -- and it is advanced, to say the least. Gupta says all she knows is its recipe -- for curing cancer.

"Cure for cancer -- a high school student," said Gupta. "It's just so mind-boggling. I just cannot even begin to comprehend how she even thought about it or did this."

When she was a freshman, she started reading doctorate level papers on bio-engineering.

"At first it was a little bit overwhelming," said Angela, "but I found that it almost became like a puzzle, being able to decode something."

By sophomore year she'd talked her way into the lab at Stanford, and by junior year was doing her own research.

In a lab area, Hartman asked Angela: "Try and make it for a feeble mind, such as this one, to understand."

Angela: "So I made something that's an iron-oxide, gold dangle...

Hartman: "You lost me." (laughter)

Eventually, here's what he did get.

Angela's idea was to mix cancer medicine in a polymer that would attach to nanoparticles -- nanoparticles that would then attach to cancer cells and show up on an MRI. so doctors could see exactly where the tumors are. Then she thought shat if you aimed an infrared light at the tumors to melt the polymer and release the medicine, thus killing the cancer cells while leaving healthy cells completely unharmed.

"And when you found out it did..." asked Hartman.

"That was pretty amazing."

It'll take years to know if it works in humans -- but in mice -- the tumors almost completely disappeared.

Angela recently entered her project in the national Siemens science contest. It was no contest. She got a check for $100,000 and promptly bought about a dozen more pairs of shoes.

"I got these shoes because they're purple and I didn't have purple yet," she explained.

Easy to forget, she is still high school. It's just her dreams that keep graduating.

"I'm excited to learn just everything possible," she said. "Everything in the sciences -- biology, chemistry, physics, engineering, even computer science -- to make new innovations possible."

Pretty big flats to fill. How will she top her cancer discovery? We can't wait.