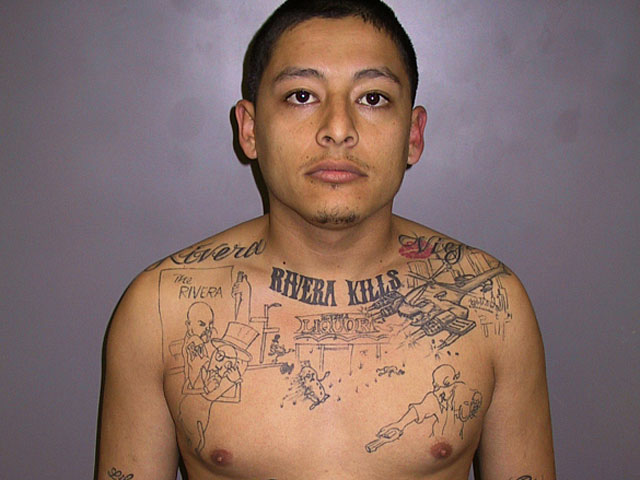 (CBS/AP) NORWALK, Calif. - When Los Angeles County Sheriff's homicide investigator Kevin Lloyd was routinely looking through snapshots of tattooed gang members, he saw something that caught his eye - a crime scene he was familiar with.

Anthony Garcia, a member of the Rivera-13 gang, had a tattoo that resembled the scene of the liquor store killing of 23-year-old John Juarez in Pico Rivera on Jan. 23, 2004, reports the Los Angeles Times.

There were numerous details the murder inked on the gang member. The paper reports that the tattoo included the Christmas lights that lined the roof of the liquor store where Juarez was shot and killed, the direction his body fell, the bowed street lamp across the way and the street sign. Above everything read the title, "RIVERA KILLS", a reference to the gang. A helicopter was also placed above the scene raining down bullets,  a nod to Garcia's alias "Chopper."

When police discovered the evidence on Garcia's chest in 2008, they launched an investigation, which was followed by the arrest of Garcia, reports the paper.

This week, an undercover policeman placed in Garcia's cell got a confession from the suspect. That yielded a first-degree murder conviction in a killing investigators had initially given up hope on, the paper reports.

"Think about it. He tattooed his confession on his chest. You have a degree of fate with this," Capt. Mike Parker told the Times.

Garcia faces 65 years to life when he is sentenced on May 19 in a Norwalk court.

Pico Rivera is about 10 miles southeast of downtown Los Angeles.