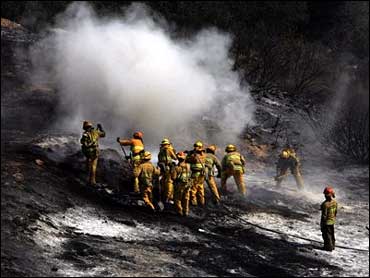 A favorable turn of the weather and the well-coordinated efforts of nearly 3,000 firefighters have led to the lifting of evacuation orders from a 23,970-acre wildfire that at its peak threatened thousands of homes.

California Governor Arnold Schwarzenegger flew over the charred landscape Friday in which only two homes and a few other buildings were lost, then praised the many fire agencies that saved thousands of others.

"How well they coordinated everything here is spectacular," Schwarzenegger said. "If others that had disasters in the past — I don't want to mention any names — if they would have had that coordination, that kind of a team effort, and (were) that well prepared they wouldn't have had the kind of problems they had."

CBS News correspondent Jerry Bowen reports that at a time when government seems unable to come to the rescue, it worked here. Two thousand homes that could have been charred timber are still standing, including Rich and Polly Grimm's.

"They made their stand with the helicopters along that ridge, they wouldn't allow it to come down," said Rich Grimm, referring to the firefighters who stopped the blaze just 75 feet from his house.

CBS News' Teri Okita reports that the fire is expected to be completely under control by Monday and homeowners are calling the firefighters heroes.

"People have worked hard for these homes," said Steve Piscitelli of Burbank. — "What can you say to thank these guys?"

Meanwhile, another wildfire in the city of Burbank, 12 miles from downtown Los Angeles, blackened about 1,100 acres. About 70 homes were evacuated as a precaution.

"Right now this is totally unpredictable because of the steep terrain," Bell said.

Firefighters battling the far larger fire in the hills of Topanga, northwest of Los Angeles, were helped by increased humidity and weather far calmer than at midweek, when strong, dry winds from the interior spread the fire rapidly.

Most of the remaining fire activity was occurring when islands of surviving brush within the burn areas went up in flames, fire officials said.

On Friday, Los Angeles County Assistant Fire Chief Tony Varela told CBS's Dave Price that firefighters learned lessons from Hurricanes Katrina and Rita, and had "updated equipment, unified command, having an incident command system, organization, effort." He also credited residents with cooperating and "getting out of the way and moving fluidly out of the area when we asked them to."