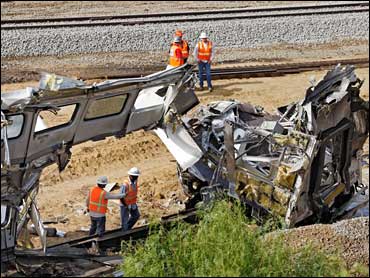 The engineer of a commuter train that crashed and killed 25 people in California last year planned to let a teenage boy operate the locomotive in violation of safety laws on the day of the collision, according to text messages released Tuesday by federal investigators.

The transcript of messages sent and received by engineer Robert Sanchez came as the National Transportation Safety Board opened a two-day hearing into the Sept. 12 collision in suburban Chatsworth that also injured at least 130 people.

The messages were the latest revelation about safety violations related to the disaster. Evidence also showed that Sanchez routinely used his cell phone on duty that day and ran a red light before the crash, putting his train on the same shared track as an oncoming Union Pacific freight train.

Investigators said there was no sign of mechanical error involving the Metrolink train that was carrying 220 passengers.

"All the evidence is consistent with the Metrolink engineer failing to stop at a red signal," investigator Wayne Workman told the NTSB's Board of Inquiry.

Drivers could see the oncoming train for about five seconds before the wreck occurred. Investigators also found that the conductor of the Union Pacific train received and sent numerous text messages while on duty. The conductor tested positive for marijuana, but he was not driving the train at the time of the crash.

Investigators also found that the conductor of the freight train received and sent numerous text messages while on duty. The conductor tested positive for marijuana, but he was not driving the train at the time of the crash.

Federal officials said Sanchez sent and received 43 text messages and made four phone calls while on duty that day, including one that he sent 22 seconds before the collision.

The texts indicate Sanchez had allowed the teenage boy and a friend to ride in the cab and sit at the controls four days before the crash, and that he was planning to let the teenage boy drive the train between four stations on the evening of the crash.

(KCAL)
"I'm gonna do all the radio talkin' ... ur gonna run the locomotive & I'm gonna tell u how to do it," Sanchez wrote in one text.

Unauthorized ride-alongs are considered a serious violation of safety regulations.

The documents do not identify the teenager.

After the crash, two teenage train buffs told CBS Station KCBS they received a text message from Sanchez minutes before the crash.

In an interview with investigators, he acknowledged being in the locomotive cab within a week before the collision but said the train was out of service and Sanchez did not allow him to approach the controls.

The text messages, however, indicate the teen did touch the controls.

"Touching the controls ... i was frothing at the mouth," he wrote in one text message.

He also told investigators he met Sanchez last May through a group of rail fans. He said he and Sanchez communicated by phone and text messages once or twice a week, mostly about train operations.

But the transcripts show they called each other and exchanged dozens of texts in the days before the crash and had a close relationship.

They provided frequent updates on their activities throughout the day, gossiped about other rail fans and shared excitement as they arranged for the boy to operate the train.

"I feel like your a cool uncle or something," the teen wrote in one message.

Hours before the crash, he wrote to Sanchez: "Im starting to get butterflies just a little bit."

The engineer replied: "u have 2 pay attention in class ... no day dreaming allowed!"

The cell phone records show Sanchez was messaging other youths and a colleague as well.

A witness interviewed at the Chatsworth station told investigators he once saw the engineer give his cell phone number to a train enthusiast who appeared to be a middle school student.

Sanchez was among those killed in the crash. His brother John Sanchez declined to comment on the newly released documents. A call to the family's attorney, Todd Moore, was not immediately returned.

Connex Railroad, which employed Sanchez and has a contract to provide train crews to Metrolink, said his actions were "repugnant" and "contrary to the most fundamental rules of rail operation."

"This rogue behavior was uncharacteristic of the Robert Sanchez known to his co-workers, supervisors, friends and neighbors as a dedicated career railroad engineer in his years at Union Pacific, Amtrak and Connex," the company said in a statement.